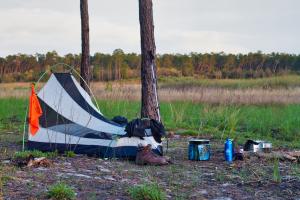 I have backpacked different parts of the Florida Trail from the Rodman Dam to Clearwater Lake in the Ocala National Forest on several occasions, but there was a section between Salt Springs and Juniper Springs that I had never done. This March I closed this gap during a three day backpacking outing. Some of this hike covered parts of the Florida Trail in the Juniper Wilderness that I had done on two separate day hikes 22 years earlier. Another part of this year's hike was around Hopkins Prairie, which I had not visited before this.


After a relaxing pre-hike car-camp night at Juniper Springs campground with Virginia, I parked my car and she dropped me off where the trail crosses Salt Springs Highway(314). Unlike the time when I started from there hiking north to the Rodman Dam, I instead headed southbound. The trail here passes through several different habitats, one of which was some really pretty sandhills.


One of the things I like about sandhills is the wide spacing of trees and the forest floor of mostly grasses and wildflowers. After about four hours of hiking with many pauses to photograph various subjects, I reached the prairie just in time to see a Northern Harrier cruising above the grasses and occassionally swooping down after something to eat. I set up camp (photo at top) in a small peninsula between the trail and the prairie under some slash pines. Around the next curve in the trail was this lone slash pine that I photographed in the morning.

While I ate my dinner I enjoyed a seranade of sandhill crane calls across the prairie. As dusk approached a soft buzzing sound slowly increased in volume and a dense layer of mosquitoes appeared above my head. When they started landing on the tent and my gear I quickly prepared camp for the night and ducked into my tent, where the constant buzzing reminded me of sleeping in a canoe in the everglades years ago. I went to sleep to a chorus of what sounded like bullfrogs, although I could not be sure that they were not alligators grunting, which made me think of William Bartram's story of camping on Dexter Point along the St. Johns River in 1774.


As the lightening sky signaled the approach of dawn, I emerged from the tent with my camera to see what sights the morning would bring. One of these was the mist rising from the little pond by the trail where I got my water. Not an ideal source since the 'frog water' - as one passing hiker called it - required filtering through a cloth before treating. Also at this pond I photographed the diminuative quillwort arrowhead wildflower.


Hopkins Prairie is about three miles long and varies from about one quarter to a half mile wide with the Florida Trail following the north and east edges of the prairie for about five miles. Despite the name, this natural community is probably more like a basin marsh than a typical wet prairie. On one side of the trail is the prairie and on the other side the habitats varied between hardwood hammocks, various mixed wooded areas and scrub. As I was hiking past one of these scrub areas a family of Florida scrub jays were moving through the trees along the trail and dropping down to the ground to forage. A pair of brown thrashers and a male cardinal were also here and seemed to be hanging out with the scrub jays.


Not far from where I saw the scrub jays I photographed a mall patch of pretty little yellow wildflowers known as rock-rose. Also called pinebarren frostweed, Crocanthemum corymbosum is a perennial herb of scrub, sandhills, dunes and dry open hammocks in the southeastern coastal states from Mississippi to North Carolina and throughout much of Florida.


For much of this day's hike small lizards would run from just ahead of me on the trail into the undewrgrowth. I finally captured photos of several of these. Some of them were the Florida scrub lizard, a state endemic(only occurs here).

Later I saw some six-lined racerunners.


Nearing the end of the day's hike I came to places where there were several members of the pipewort family. The Eriocaulaceae is a family of plants primarily found in bogs and along the wet shores of ponds and lakes. These little wildflowers, commonly also called bog-buttons and hatpins, can be a challenge to identify more specifically. For instance, these tall pipeworts could be