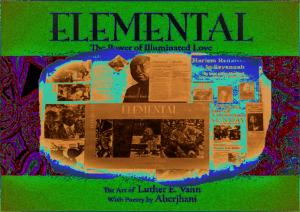 Art and poetry have long functioned as a kind of team in my creative life. It’s interesting at this point, while setting up the profile here on Fine Art America, to recall the different who have inspired me.

I never intended to make attempts at doing what they did, and do, so expertly. I usually wrote about their work or composed poetry inspired by it. Any number of times they were kind enough to provide cover art for my books. Now I’m branching out a bit and enjoying producing some images which I hope people find engaging on a few different levels.

Among the artists I worked with the most was the late Luther E. Vann, with whom I created the book of art and poetry titled ELEMENTAL, the Power of Illuminated Love. The excerpt below talks about how we viewed the traditions of combing ekphrastic poetry and art. It from my essay, Living Art, Living Poetry, on the Anniversary of ELEMENTAL, The Power of Illuminated Love:

“Painting is poetry that is seen rather than felt, and poetry is painting that is felt rather than seen.”
––Leonardo da Vinci

There’s nothing surprising in the observation that literary artists and visual artists often combine their talents to create works which, when joined together, allow each to transcend possible limitations of the other. The literary artist lends verbal depth to the visual. The visual artist provides visible articulation for the literary.

The goal of each has generally been the same: to fashion out of the raw material of creativity a symbol—or an image—capable of communicating some significant experience of truth, beauty, life, or death, to the observer. And there have been in fact any number of successful partnerships between such creatively charged intellects. Artist Romare Bearden and playwright Ntozake Shange’s I Live in Music comes to mind; as does various works by Salvador Dali and Federico Garcia Lorca; the visual style of Aaron Douglas and the literary voices of the Harlem Renaissance; the French poet and critic Apollinaire Guillaume, whose literary loyalty empowered the bohemians of Picasso’s early days; and more recently, poet Coleman Barks’ interpretations of Jalal Al-Din Rumi “illuminated” by Michael Green.

I meditate upon these creative artists’ subtle yet titanic achievements at this time for two reasons: one is because the ear-drum shattering booms of war and the soul-numbing cracklings of human discontent that continue to echo across planet Earth remind us of how painted and verbalized visions help people retain a sense of context and harmony in an era that too often seems to make such notions—like black and white TVs-- utterly obsolete. The second reason is because May 29, 2010, marks the second anniversary of the publication celebration for the art and poetry gift book, ELEMENTAL, The Power of Illuminated Love, held at the Jepson Center for the Arts in Savannah, Georgia. A third less official reason is because recently ELEMENTAL was added to the Google Book search engine, which means those unfamiliar with it may now enjoy an extended preview .

Considering the legacies of visual art in partnership with literary art, in general, reinforces the powerful resources they still provide. Contemplating the anniversary of ELEMENTAL in particular renews appreciation for the extraordinary milestone it continues to represent.