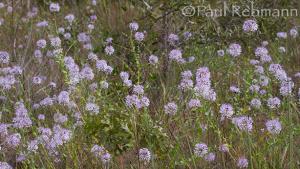 Clasping Warea is a rare Florida endemic wildflower that occurs only in central Florida. The ideal habitat for this endangered plant is longleaf pine sandhill.

Sandhill is a high and dry pine forest with an open savanna-like understory that is typically made up mostly of wiregrass with scatterings of herbaceous wildflowers. Longleaf pines predominate, often augmented with turkey oaks, both having root systems that allow them to obtain the necessary water in this habitat. The soil is deep sand and the savanna is maintained with frequent small wildfires, naturally ignited by lightning. This periodic clearing of the undergrowth allows the wildflowers to grow without competition from shrubby plants that are not adapted to the frequent fires. Fire is also a critical component in the reproductive cycle of both wiregrass and longleaf pines. Sandhill was part of the great longleaf pine forest of the southeastern coastal plain that once extended from Virginia into Texas.

Warea amplexifolia is a member of the pinelandcress genus which was named for Nathaniel A. Ware (1789-1853), a teacher, lawyer and land speculator who traveled extensively and lived in various parts of the United States. Ware was a member of the American Philosophical Society, pursuing the natural sciences, including botany and geology, and collecting many plants during his travels. He apparently saw and described or collected a specimen of clasping warea in 'east Florida' in the early 1800s.