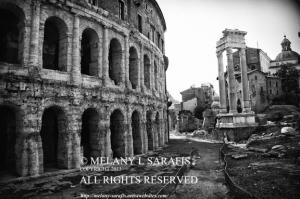 We said goodbye for now to our hosts in Florence, and left our awesome hotel for Rome. The train ride was pretty uneventful, we had no problems finding the right track, and getting our reserved car and seats was a breeze. After getting off the train, we had to buy a pass for public transportation (metro, trams and busses) and then find a bus or tram to get us to the Pantheon. We ended up riding the metro, and it was pretty easy but doesn’t go anywhere near the Pantheon, so we had to walk with our carry on suitcase – luckily it’s on wheels!

The Pantheon was awesome – Tony had never been there before. We checked out the Church of Santa Maria Sopra Minerva. In front is a Bernini statue of an elephant with an Egyptian obelisk on top. Inside, we saw Michelangelo’s Christ Bearing the Cross. This is the church where Galileo went when summoned to Rome for stating that the Earth revolved around the sun. The Church didn’t like that, and he was forced to kneel at the alter and recant his statement. Just days before he watched his friend burn for making statements similar; I can imagine he was shaking in his boots as he entered that church. Legend has it that as he walked out of the church, he whispered “but it DOES move.”

We decided to go to the other side of Rome and check in the hotel a little early to ditch our bags. We found a bus this time, to bring us within a stones throw, less than a block, to the Vatican and our B&B. A nice place, decent room, but not as “homey” as the one in Florence. We walked over to the USO, hopped on a bus to go back to Largo Argentina and the cat sanctuary. The cats roam amongst ruins in the area where Cesar was assassinated. Of all places in Rome, Tony really wanted to go here.

We also went to another church – the Gesu church, and saw the most awesome Baroque ceiling in the world! “The Triumph in the Name of Jesus” Paintings, stucco angels, and a riot of decoration make this 3D ceiling something awesome to see. Truly amazing.

We stopped at a pizzeria for Napolian Pizza cooked in a wood stove. Mmmmmmm After lunch, we headed to the Capotiline Hill area to see the “Mouth of Truth” and then walked across the Circus Maximus to the Metro station to bring us back across town to the hotel. We ended up walking a lot more than planned, mostly because we’d get lost and did a lot of backtracking. Our map isn’t exactly to scale ;-( Rome is really overwhelming and frustrating for me. Tomorrow we’re scheduled for an “Ancient Rome” tour (Coliseum!) and someone else can lead us, so I don’t have to worry about directions! Looking forward to a tour where someone else tells me where to go :-0

Believe it or not, neither of us is interested in going for gelato tonight. We picked up pre-made sandwiches and drinks on the way home, and we showered and put on jammies early. We’re both just too worn out to care. I had a lot on my list today, but didn’t make half of it – Rome is just too big, crowded and confusing. And I haven’t seen a stinking Caraviggo yet! But tonight, I’ll be going to sleep early, hopefully today’s soreness is gone before tomorrow.