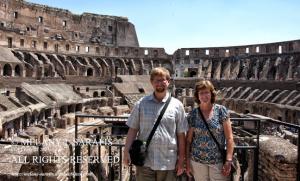 Today we got to sleep in a BIT. We didn’t have to be at the USO till 9 for our 5-hour tour of Ancient Rome. We’re in a B&B, and they brought breakfast to us at 0745 – brioche (croissant) with apricot and one with chocolate, cappuccino, juice and toast. Not as good of a spread as we had in Florence, but they brought it here. We’re both just worn out. Rome is crowded, busy and confusing – contrast with Florence with crowded easy to navigate and laid back. I prefer Florence! Maybe we should have done Rome first, and then went to Florence.

Today was the first tour we’ve taken since arriving in Italy. We didn’t need one in Florence; actually I was the tour guide. Today was supposed to be a small tour – no more than 10 people, arranged by the Rome USO. I’ve seen some really huge tours and I was hoping we didn’t get stuck on one of those. It turns out, we were the ONLY ones signed up! And our tour guide is an archeologist! He did his thesis and masters work on some of the locations of our tour – I feel like we hit the jackpot with this one. This guy knows his history and everything about this area of ancient Rome. This tour was called “Ancient City in Depth (and it was VERY in depth), and was 5 hours long. We saw the Coliseum, Roman Forums, Palatine Hill, Temple of Julius Cesar, the Senate, House of the Vestal Virgins, the Basilica of Maxementius (which Luca, our guide did his thesis on). He told us great historic stories of the senators, emperors, gladiators, and the gods. We also had special tours BELOW the Coliseum and up above near the top – places that only special tours get to go. He was very knowledgeable about the inner workings of the Coliseum, the Roman Senate and politics of the Emperors. I learned a LOT today and enjoyed the tour very much. We stopped at a restaurant near the Coliseum for lunch – Tony had Spaghetti Amatricinia, and I had Lasagna. It was a so-so touristy joint. We finished up the tour for another couple hours, then said goodbye to Luca.

After the tour, we took a taxi to Gallery Borghese and arrived in time for our 5:00 appointment to view the artwork there. I saw David #3, this one by Bernini! (We’ve seen Michelangelo, Donatello, and now Bernini’s Davids) I finally got my Caravaggio fix! His paintings were awesome! The stars of the Borghese are truly Bernini and Caravaggio with several works by both of them.

We made our way home via a packed metro (we’re getting good at figuring out the metro, much easier than the bus system!) We headed for dinner in a restaurant right next to the hotel, then headed for gelato (Tony had melon again, I had caramel – yum!) We went to one of the souvenir vender to buy postcards so I can mail them from the Vatican tomorrow. Now we’re both in the room, totally exhausted.

Tomorrow is another 5-hour tour at the Vatican, the Vatican Museum, and Sistine Chapel. After that, a 90-minute train ride back to Florence. Rome has worn us out!