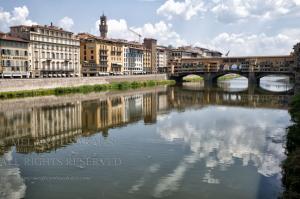 20 July 2013
We got to sleep in a bit this morning. Our "Florence marathon" is over - whew! We plan to visit the big cathedral today, and that's all, no museums or galleries on the schedule. We'll probably just people watch, or maybe walk to the Arno River and walk alongside it, and look at the old buildings. Maybe I'll take the little camera and make some videos of the historic area.

This hotel is a family-owned/ran place in a really old former palace. The man and woman (mother, son) who own the place reminds me of my mother-in-law and brother-in-law, Billy.
At breakfast, he's running around making cappuccino, cleaning tables and taking care of people checking out, asking questions, etc. Like a chicken with his head cut off, while Mama stands around and makes pleasantries with people and watches everything. When he thinks nobody is looking, he tells her "help me out, can you make cappuccino?" After he walks off to do something else, she starts making cappuccino. LOL my MIL drives Billy crazy like that too!
Every morning, I've had cappuccino, a roll with some awesome spreadable cheese (I gotta find out what it is) and fresh fruits - cantaloupe, watermelon, honeydew, kiwi, and grapes. A very nice breakfast. I really do like this hotel.

The Cathedral was cool, very huge! This is the place that, on Easter Sunday in the 1400s (I think) Lorenzo de Medici and his brother were attacked by assassins in the middle of church services. His younger brother was killed, but Lorenzo managed to escape, although injured. This is also the place where Brunelleschi built his huge, wonderful dome. It sat with the huge gaping hole for 200 years, until someone smart enough figured out how to build the dome.

After the church, we came to the hotel so Tony could put on shorts – a dress code in churches requires that knees and shoulders be covered. I’m shocked at the number of tourists who are disrespectful of the traditions, and go in with skimpy shorts, skirts and shirts. This church makes you buy a poncho to wear if you’re not dressed appropriately. I’ve seen people acting like they were in Disney World inside the churches. We headed back out, to stroll down the Arno River take pictures and have lunch. We went to Dante’s on the other side of the river; I had Ravioli with ricotta and spinach inside, with a spicy arribiata sauce. Tony had gnocchi with sausage and truffles, and a rich, buttery sauce. It was very good! We decided early on to find a pasticceria after and splurge on some Italian pastries. We wandered back up the river, four our spot and got chocolate cream puffs and peach tea to eat as we continued our walk. They were yummy!! Then as usual, we took a break during the hottest part of the day away from the hordes of people in our air-conditioned hotel room.

We left the hotel about an hour before dinner, planning to stroll around before heading towards the restaurant. I don’t plan to get caught in the rain again, so I put our umbrellas in the bag and I’m sure glad I did! It was lightly raining before we got to the restaurant, Trottoria Anita, behind Piazza Vechio. This was probably one of the best (if not THE best) meals we’ve had. We both decided to get something different from pasta. I had chicken with asparagus and an awesome sauce, Tony had chicken with ham and cheese and a sauce. I had a salad, and Tony had white beans as sides, and we had bruschetta as an appetizer. The house wine was wonderful! A nice, relaxing meal.

After dinner, we walked along the river again, and took sunset photos, and just enjoyed strolling near Palazzo Vechio and the Uffizi. After dark, the touristy areas become something different. Instead of hoards of tour groups, there are many small groups of people and street performers. We sat on the steps of the Loggia at the Uffizi and listened to a musician play the acoustic guitar. It was very relaxing just sitting in the cool plaza listening. I even bought her CD – Justyna Maria Janiczak “Guitar sound of Florence…” I’m playing it now! Very soothing music – what a wonderful end to the evening.

As we strolled home, of course we stopped for gelato, in a new place we haven’t tried yet. Tony got Blackberry and I got Strawberry. Tomorrow we have no plans, other than pack our suitcases and get ready for the 3-day trip to Rome. Our time here in Florence is about over, tomorrow will be a low-key relaxing day. Maybe we’ll find a grocery store and buy some pasta to take home – or a 30 lb block of Parmesan cheese ;-)


Tomorrow, we'll pack up our suitcase to store here at the hotel, and get our Rome bag together; we go there on Monday.