Going For A Walk With My BFF 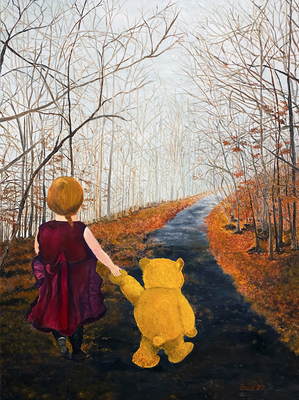 This pandemic has definitely influenced the subject matter of my most recent paintings.

Though it may not be readily apparent, that is definitely the case with my latest effort which seemed to evolve the more I got into it.

I never really know what sparks an idea with me that ultimately leads to a painting. I do know that I'm always looking to create the impossible, or at least, the highly improbable.

So with the coronavirus lurking in my subconscious, I was trying to think of reassuring images that at the same time, could be somewhat threatening.

In one of my earlier paintings, I had a young boy pulling a wagon occupied by his teddy bear.

I didn't have a teddy bear as a kid but I must have some fascination with them as I decided this time I'd have a young girl and her teddy bear out for a walk. My initial sketch had the two walking virtually identical to what you see pictured here - both with their opposite foot up, hand in paw, looking forward.

In that first sketch, they were walking on a path that led into a dark and mysterious woods. The name of the painting was going to be "An Uncertain Future".

I began to sketch out the trees along the path. But as I did, I decided to shift the scenario and get rid of the dark and foreboding aspect. We have enough of that already.

Instead, I created a kind of nebulous sky where the trees almost disappear in the distance. Rather than have the trees be leaf-filled which would block out the light, I opted for bare trees with just a few leaves still hanging on. This created a far less sinister walk in the park - which I further enhanced by pumping up the color in both the girl's dress as well as the brightness of the teddy bear.

Still, I couldn't decide what to call the painting which is a rarity for me. When I was just about finished, I posted the image on Instagram and called it, "Take My Paw". Obviously, that didn't feel quite right. When looking at the finished product a bit more, it hit me - that's the girl's BFF - Best Friend Forever.

Thus, the painting finally had what I consider to be a proper name, "My BFF". I think it's a very positive painting. The two are confidently heading down the path of life, not quite sure what's around the next corner. But there's a certain confidence exhibited that whatever it may be, everything is going to be okay. That's what I hope for all of us.