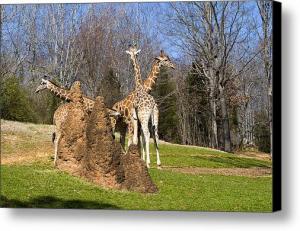 A group of giraffes. The scientific name for a Giraffe is Giraffa camelopardalis . The are found in the wind in Africa. There is 6 subspecies of giraffe the subspecies is identified by the patterns in its fur. The subspecies are West African, Rothschild’s, Reticulated, Masai, Angolan, and South African. The animals in this image are of the Reticulated sub-species. They are found around Somalia. Giraffes grow to 16-20 feet tall approximately and weigh up to 3500 pounds. They are herbivores; their diet mostly consists of plants. More specifically acacia leaves.

The reason I took this image is that I found that even though the image was shot at the Asheboro zoo the giraffes were interesting to watch. They are not really known to live in a communal setting and generally will somewhat stay together in this image they seem relatively well adapted to being together. The habitat was formed with artificial termite hills further simulating their natural surroundings in the wild. No cage is what I like best about this zoo. Animals are free to roam and have enough space to have a quality of life. At any rate its time to move onto the shoot itself.

Shooting at a zoo as in this image can be difficult the crowd, the lighting is not normally optimal, ohh and did I mention the crowd while waiting for that image that you actually want to capture. As far as the crowd goes, I would suggest going and shooting on a non-peak day such as Tuesday-Thursday and either early or late in the day. In my experience earlier is better. Second I would suggest the following equipment: monopod and a CPL filter and uv filter. First the monopod a tripod would actually be choice but generally you are limited in setup space and for that matter time to capture the image a monopod is no bigger (or heavier) then the average walking stick as opposed to several pounds of a tripod. It also sets up quick which is a must for those once in a lifetime shots while you’re watching your favorite animal subject. Second the filters a ND filter will clarify the color that will generally not be as sharp in non-golden hour photography that you will experience and the UV filter will assist in filtering out the stray light. I would also suggest using your lens hood for better color depth and stray light elimination.

With all that said the zoo can be a great resource for photographing animals you would not have access to otherwise. Take your time and watch being selective on the shots you take. It can be very rewarding.

To view this image in our photo gallery click below