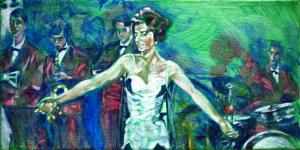 The Peter Lawrence Gallery is proud to exhibit James Napoleon's "Obsession," an 18 panel "mega-painting" based on a performance by Italian vocalist Mina Mazzini. The work, which was completed in 2011 will be on display from September 7 - October 7 with an opening reception on Sunday, September 9 from 1-5 pm.

James Napoleon has provided some thoughtful answers to questions about "Obsession." Read more about James Napoleon and his work here.

Could you describe your first memory of viewing Il Cielo in una Stanza?

I had probably heard the song before seeing the visual, as the song is on soundtrack of the movie 'Goodfellas'. A friend had directed me to a YouTube video in black & white (1959) of a very young Mina singing on an Italian variety show 'Il Musichiare', and I was amused -- and smitten -- by Mina's exuberent performance, actually making herself breathless by the end of the song by her energetic gyrations and belting out of the lyrics. I searched for and played every Mina video I could find, and I can say I was spellbound by Il Cielo in una Stanza -- there was a lump in my throat and tears welling in my eyes the first time I watched it (this still happens sometimes when I watch it). Here she is, this majestic, heroic (5'10"), but so exposed and so vulnerable a beauty of a woman; so earnest, so absolutley consumed in her song, looking me (actually, the cameraperson) directly in the eye, appealing, gesturing. It was in a way like falling -- becoming lightheaded and falling -- in love.

Is this your first time developing a "mega-painting" or depicting a recorded performance?

Thank you for making the distinction -- Obsession is my first work at depicting a recorded performance, and my second (or third) mega-painting. I felt I had a breakthrough result with my Classmates mega-painting in which I painted 18 portraits of actual high school classmates (class of 1973) based on black & white photographs from my high school class yearbook; the idea was to focus on the overall look of the time, the innocence and hopefulness and naiveté of the expressions, not on individual likenesses. I feel the result managed to convey both, though, and it seemed to me the work attraced considerable attention. I had earlier done a nine-panel portrait of autumn leaves of relatively uniform autumn brilliance and scale, and that might have been my first mega-painting. I had to work harder with Obsession because it was a performance, and I had to choose when/where to stop the motion for the 18 key frames. I was also emotionally involved (one-way, superficially) with the subject.

How might viewers who have never seen the performance experience the paintings?

Your palette in the paintings has a kind of "glitteriness" or luminosity that looks invented. Is that part of your personal response to the performance?

I have described the performance as dazzling. That is, as if beguiled by light. I was thinking consciously of emeralds and rubies when I was mixing colors for the paintings, how they dazzle (I was a rockhound when I was a teen, and precious stones still never fail to turn my head; when I'm doing graphic design work in NYC, I browse the display cases at Tiffany for the recharging effect on my fatigue). But back to the paintings. I'm glad there is a perceptable glitteriness, as it was my intention to translate the animated brilliance of the performance into paint film.

I will admit to daydreaming, even fantasizing, about Mina Mazzini -- the Italian performer of Il Cielo in una Stanza -- while physically engaged in painting. (She was born 1940, by the way, so she is 72 years old today.) I was wondering what kind of person she is -- imperious and demanding, as it is said Martha Stewart is, or sweet and earthy, as I would like to think she is. Did she apply the performance makeup herself? Is she comfortable in that dress, or is she suffering in it too tight? I used grainy enlargements made from screen captures of the tiny video as reference, and I had to consult anatomy references in many cases when I was painting the hands; two frames in particular -- panels 9 and 10 -- the hands are nearly complete fabrications. As for the laying on of the paint, it was more of a background consciousness. I had planned my process beforehand, toning the canvases green, then building up the images working from dark to light, and I stuck to that process. I tried to work on three panels at a time so that any evolution of technique discovery would be spread out. Your question isn't necessarily addressed to Obsession exclusively, though. So I'll cite the landscapes and barnscapes and coastalscapes that I paint, to say that most recently (my recent painting retreat on eastern Long Island) I still think about my subject material as I'm painting it ("what kind of nails are holding that siding on that barn?"..."how many coats of paint are on that farm stand shed?"), though I am thinking more about the paint on the brush and trying to move it more freely onto the painting surface. I am trying to let the paint do more of the work of creating the image surface than my controlling the image surface.

At the moment, I am admiring rather enviously local artist (Roxbury) Karen Cashman for her en pleine aire brilliance, Pete Sparber for his combining expressionism and figuration, Karen Cooper for her original fiber creations, Gary Godbee for his vistas, and Annie Wildey for her intrepid experimentation. I still look to Hopper, Pollock, and Berthe Morisot for inspiration and courage.

For the duration of the Obsession seige I was pretty high on Warhol (did you know he was an illustrator?), and had just begun to appreciate Pollock for his conviction in the perfection of what he was doing. Lucong (Chinese) came to my attention somehow as an artist with a persistent focus on eyes as the defining expressive human organ, and I had tried to get into his head when I was completing the Obsession close-up panels. I was also discovering the conceptual genius of Sol Lewit at the time, though I can't say his vision was an influence on Obsession.