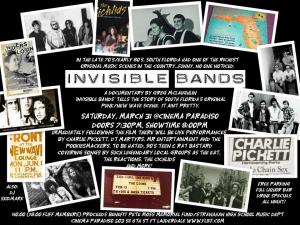 Greg McLaughlin was a wild rocker in a straight band, often intoxicated but not so much that he doesn't remember flying one night, as it were, on the shoulders of his buddy through a sold-out crowd at 27 Birds bar in Miami. His four-piece punk outfit, The Front, opened for the likes of U2 and The Psychedelic Furs.

That you've never heard of him, or The Front, for that matter, is the premise behind McLaughlin's documentary "Invisible Bands," which snapshots South Florida's fleeting, blink-and-you'll-miss-it punk and new wave scene of the late-'70s and early-'80s. For about five years -- or shorter, depending on who you ask -- dozens of cowpunk, roots rock and punk bands spawned from dive bars in Broward and Miami-Dade counties, producing the region's first original music scene. At the forefront were local luminaries such as Charlie Pickett and Critical Mass, and ultra-obscure acts in Screaming Sneakers and The Reactions.

"I was a real loose cannon, age 26 and real crazy," said McLaughlin, with a chuckle that sounds like a smoker's cough. "From the '50s to the '70s, all you had were cover bands until we came along. Not only was the punk ethic in vogue, but original bands finally said, 'Hey, I might not be Jimmy Page, but I can play just as good as Sid Vicious.' It's amazing that the rest of the country never saw it, but that's because we didn't last long."

The documentary, which debuts Saturday night at Cinema Paradiso in Fort Lauderdale, took McLaughlin three years to shoot on a $300 Sony Handicam. In it, he splices interviews with Pickett and others with grainy footage of The Eat, Futurisk and other largely forgotten acts playing the Agora nightclub in Hallandale on New Wave Tuesdays, he said. Songs would reflect the political polemic of the era, including race riots, the Mariel boatlift and the Cocaine Cowboys.

"I kept getting asked, 'Well, who gives a crap?' " said McLaughlin, who's now 57 and living in Lake Worth. "The fact is I do, and so do other bands of the time, and it was a time right before vinyl died, before computers, and we had an eclectic group of bands and Charlie Pickett was the biggest. I wanted to make an historical document about these bands before they passed into nothing."

The "Invisible Bands" screening will include performances from Pickett, DT Martyrs, Mr. Entertainment and the PookieSmackers, Rat Bastard, To Be Hated and '90s Teen. Proceeds will benefit the Stranahan High School music department in honor of Pete Moss, a former musician of the scene.

Rob Elba, who's organizing the documentary's premiere, said Florida-spun rockers often never toured out-of-state and lost their fanbase, most of them University of Miami kids, when the state raised the drinking age to 21 in 1985. "Miami had a 'disco city' stereotype so no record labels came," said Elba, a friend of McLaughlin's whose early-'80s punk band, X-Conz, opened for The Front. "These bands were good enough that they could've broken through. The ironic thing is that we were considered so cool, but nothing ever came of it."

Cinema Paradisio Invisible Bands, a documentary focusing on the late 1970s and early 1980s South Florida punk and new wave scene that included The Eat, Critical Mass, The Cichlids, Charlie Pickett & The Eggs, The Front and The Reactions, will be shown at an event that will also feature live music and on the back patio, art from former punk musicians