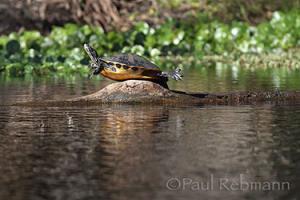 My 'on the water' photography has increased greatly the past 4 years since purchasing a sea touring kayak that I found on Craig's List. Prior to this most of my paddling had been in a canoe. I acquired the kayak to allow me to go out on solo photography paddles and also for extended kayak camping with my friend Daniel Reed from Tennessee.

Kayaking is a great way to see natural Florida and its flora and fauna. The low 'near the water' position provides a great angle for photography and that low profile along with the relative quietness of a kayak, allows sighting of even more wildlife than in most other boats, even canoes. I have seen more green herons since I started kayaking than I had previously, like this pair along the Tomoka River.


Most of my kayaking has been solo, which allows me to stop and spend whatever time I want photographing various scenes and subjects. On one paddle last year I met another solo kayaker on Blackwater Creek who I only knew from reading his Dave's Yak Tales blog.
I have participated in several kayak camping trips with Daniel & other friends, plus field trips like this one on the Silver River with groups such as Florida Native Plant Society or day trips with an informal group of paddlers known as the River Runners. The string lily image below was made on a lower Ocklawaha River paddle with the River Runners.


In Florida almost any body of water with access is paddle-able, although some are more scenic than others. The natural parts of the Ocklawaha River are particularly nice, as is the Silver River that flows from Silver Springs to the Ocklawaha. The Suwannee River is great for kayak or canoe camping trips from 1 or 2 nights to a week or more. For more information check out the Suwannee River Wilderness Trail.


For the more adventurous, there is the Florida Circumnavigational Saltwater Paddling Trail, which Daniel and I kayaked for a week from Big Lagoon State Park near Pensacola to Henderson Beach State Park near Destin.

Water - especially salt water - and cameras do not mix. I killed my previous camera in the keys when the cockpit filled with water while snorkeling in choppy waters near Big Pine Key. The dry bag I was using did not remain dry inside. I learned a hard lesson that dry bags are not created equal. It is important to use a good waterproof bag that is easy to open and close, such as the one I now have, a Sagebrush Dry Hip & Deck Pack. My current camera survived a dunking in the gulf of Mexico thanks to that bag which simply floated, tethered to the overturned kayak in the over six foot waves.

The Scarlet Hibiscus below was photographed along Spring Garden Creek, between DeLeon Springs State Park and Lake Woodruff.


The Cooter on Alligator Log image was made on Snake Creek near Hontoon Island State Park.