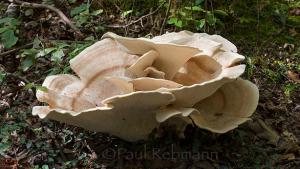 Exploring nature can be fun and full of surprises, such as discovering one of the many varieties of mushrooms that are often found in the woods. The huge mushroom pictured at the top of this post was about a foot and a half across. and is called a Berkeley's Polypore. Virginia & I spotted it a couple of years ago along a May Prairie State Natural Area trail less than two miles from where I grew up in Manchester, Tennessee. This species is also called Stump Blossoms as they are often found at or near the base of hardwood trees.

The Mushroom in the Woods above was photographed near the trail on the lower portion of Jackrabbit Mountain in the Nantahala National Forest of North Carolina. This is possibly a Two-colored Bolete mushroom - Boletus bicolor - or more likely the similar Boletus pseudosensibilis. These are usually found from late June through October on the ground in oak woods throughout much of eastern North America.

This Goldstalk mushroom was photographed in the woods along the shore of Lake Chatuge in the Jackrabbit Mountain campground. Goldstalk mushrooms are found in eastern North America from Quebec to Florida, under oaks and other hardwoods. They are also called ornate-stalked bolete for the reticulate stem.

Mushrooms are the fruiting bodies of fungi that grow mostly underground. When the time is right, often after rains, the fungi send up the structure that develops and eventually releases the tiny spores that will spread and grow new fungi. These spore dispersal devices can take many forms, the more familiar being the typical 'toadstools' with gills or pores in the undersides of the caps. Another form includes puffballs like the Barometer Earthstar pictured above that release their spores when disturbed by animals or raindrops. There are other various shapes that exude odors that attract insects to spread their spores, such as in the stinkhorn family.

These aromatic mushrooms are often smelled before being seen. I have come across the Columned Stinkhorn on a number of occasions. These fungi have two to five reddish sponge-like columns growing from a white egg in the ground, the remnants of which can often be seen still attached around the base of the columns. These columns are fused at the top, forming a roof over the dark glebra, or spore mass, the source of the insect-attracting fetid odor.

Some of the smallest fungi I have come across are the Fluted Bird's Nests that I saw for the first time this year. They were growing out of the mulch in a residential yard in Lake Helen near where we evacuated during hurricane Irma. And last year as I was leaving town for the hurricane Matthew evacuation, was the first time that I ever saw a fairy ring.

A Fairy ring forms when a fungus growing underground sends up the fruiting bodies along its perimeter creating a circle of mushrooms. The particular species that I probably saw is frequently found in lawns or on golf courses, and the grass above the fungus is often a different shade than the surrounding vegetation. At least one of these common fairy rings is highly toxic and known as the vomiting mushroom.

These orange mushrooms grow in clusters on dead wood, either exposed or in the ground, appearing mostly in the fall in wooded areas east of the Rocky Mountains. The gills attach down the stem. Jack O'lantern mushrooms are reported to glow in the dark, with a faint greenish-blue light emanating from the gills beneath the cap.

For more information and images of these fungi and see all of the mushrooms posted at Wild Florida Photo, visit http://www.wildflphoto.com/fungi.