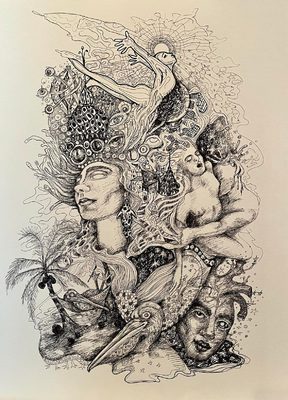 PELICAN MAN
There was a lonely pelican who had his own island at his disposal . He was quite a large bird with pale pink plumage, ink colored head, turquoise eyes and feet, and an insanly flaming red pouch under his bill. With such lavish looks and a sizeable property any bird should have felt like a King, but not this one.
The pelican was clumsy on land and not very good provider for himself either. He was lucky just with small fish here and there and had a secret dream to catch a very big fish, at least once, in his life time; to satisfy his enormous appetite to the full and beyond and perhaps to meet some pelican-girl. But he did not dare to fly far away from his island, he kept just dreaming and hoping.
Every night, the lonesome pelican's silhouette against buttery oversize moon was as the logo of the island and local creatures gossiped about him constantly: there he goes the dreaming, goofy fool of a bird.
And his dream came true in the most fantastic way possible: the pelican caught a mermaid by her tail. There was insane struggle. But the willful mermaid freed herself from her fish tail and ran away as a human being on her two legs. The pelican swallowed her fish tail and turned into a handsome man.
The Pelican-man had a hard time as a human. He could't adapt to his human hands, and felt clumsy and useless, worse than before. But the mermaid-woman was the apposite and took to her new role very well. Of course, even before, she was a half human after all.
She was a good hunter and excellent with fishing and also collecting fruit and berries; could easily start a fire and cook delicious dishes. She always left food for The Pelican -man but held her-self at a distance. Even though these new humans looked like very close relatives, their past memories were still fresh; they used to be different species. Mermaid -woman loved to sing at night and now there was a different silhouette against the buttery moon and the local creatures had new stories to pass around.
There was a lot of chasing in the jungle between this couple but, in the end, The Pelican-man and The Mermaid- woman became lovers. Maybe because it was unavoidable do to the lack of other chooses.
They loved each other intensely and grew into better human beings, wiser and deeper. From this incredible human connection a pair of wings appeared on The Mermaid �woman. She flew freely over island and beyond. The Pelican-man did not grow wings and felt lonely and clumsy again. His heart wept from fear to be left alone forever. But the former mermaid-woman, now a Flying Lady, took him with her to glide over the island, the vast sea; each time further away mapping fresh grounds of new discoveries.
At once, their life became an open horizon, limited only by imagination.
7/18/2016
Yelena Tylkina
The editor Charis Warchal