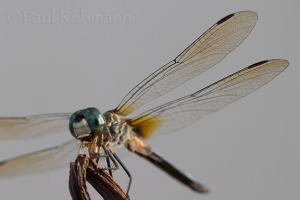 Just by chance dragonflies became one of my primary photographic subjects recently. It started with a birding trip to Canaveral National Seashore, during which we saw more butterflies than birds. One of these was a new butterfly for me, a male Julia. I had only seen a female Julia butterfly once before and that was recently (see the Schaus' Butterfly post from this June). In between the various butterflies I photographed a very small dark dragonfly. I thought that it might be a male seaside dragonlet but to be sure I submitted the photos to bugguide.net and received confirmation that indeed it was Erythrodiplax berenice.

The next weekend, dragonflies were swarming at the house and over a period of several days I photographed a number of dragonflies, at first thinking that they were all seaside dragonlets, some male and others female. As I sorted through my photographs and compared them with Sidney W. Dunkle's Dragonflies of the Florida Peninsula, Bermuda and the Bahamas, I realized that all of these that I photographed around the yard that week were blue dashers - juveniles and adults of both sexes.

I then went back through years of my dragonfly images, finding, checking and sometimes revising my identification of three similar small dragonflies: blue dasher, seaside dragonlet and little blue dragonlet.

You might think, how hard can it be to tell these apart? For starters, males of all three species have blue and black abdomens. The Dunkle book describes the mature male seaside dragonlet as all black.

But they start out with an abdomen that is an orangish-yellow on top, then quickly darken through shades of blue before turning black.

The juveniles also have a yellow and black striped thorax (the middle part of the body, between the head and the abdomen and where the legs and wings are attached) that looks like tiger stripes. The dragonfly that you see in the wild could be at any stage of this darkening. Then there are the females, which also become black, but more slowly and in one of three different color forms.

In the male-like form, like the males, the thorax darkens before the abdomen.

In the two female forms, the abdomen darkens before the thorax, and one of these – the spotted female form – has a large brown spot in the middle of each wing.

As in the other Florida dragonlets, the mature male little blue dragonlet(Erythrodiplax minuscula) has a dark face, in this case metallic blue to black. Immature and female faces are pale yellowish-brown to olive-green colored. This is the smallest of the dragonflies discussed in this post. Adult males have a blue thorax and a pale blue abdomen with segments eight through ten black. All little blue dragonlets have white abdominal appendages and they lack the 'tiger stripes' on the thorax.

Females and immature little blue dragonlets have a yellowish, light-brown abdomen with a black stripe running down the length on top, interrupted black side stripes and also have dark segments 8-10. As males mature they darken simultaneously from the thorax back and from segment 7 forward, with the front of the abdomen retaining light colors the longest.

Blue dasher(Pachydiplax longipennis) dragonflies can most easily be differentiated from the dragonlets by the solid white face. Like the seaside dragonlet, blue dashers have a yellow and black 'tiger-stripe' thorax. Mature males have green or blue-green eyes and a pale blue tapered abdomen with a black tip. Females have two parallel interrupted yellow stripes down the abdomen.

Blue dashers are also known for frequently perching in the obelisk posture on hot days. This 'head stand' position sticks the abdomen up vertically to face less surface area towards the sun.