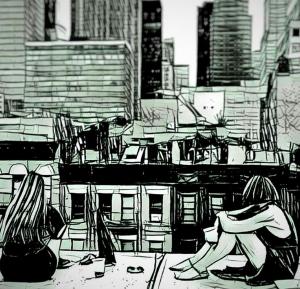 It is odd to wake up to music. Not, I don't mean, like hearing the music you picked for your alarm clock. That's fairly normal. To hear the first notes of Ode of Joy because you thought it would be ironic to have that as the opening to your first groggy moment of the day. The Ode of Joy playing as you tried to pull yourself out of the warm grasp of your blanket, that's rather normal. Hearing any music as your alarm is normal. It is downright ordinary and, even, possibly the most normal thing on Earth. The most normal thing on Earth is being that you wake up to music from an alarm clock or an alarm on your phone. Odd to imagine that, everyone waking up at similar times to music that they once chose because it was their favourite song and is now their most hated song.

Maybe, at one point when you wake up, someone is listening to the same song as you are. Listening to the exact same guitar or the exact same voice as you as you both do the roll of shame out of bed. That is an incredible thought but it is not the odd thing that happened to me. I woke up to actual music. Living on the very top floor, I hear everything that goes on the roof. If there is someone fixing a satellite to the roof, I hear the bolts being drilled into the floor. If some teenagers are goofing off up their with some bottles of beer, then I hear them drinking, laughing and throwing the bottles around. It is rather normal for me to hear everything on the roof at any time.

What is not normal to hear on the roof is what I could only consider to be a wonderful melody on a guitar. The twangs of her guitar made me rattle my brain to try to imagine what song those notes dare came from to be played by such a beautiful sounding guitar. Racking my brain, I couldn't imagine a single song with the same notes, the same pattern; my thoughts rattled with ideas of the ideas behind the twanging strings but never I could feel when the song came from. My mind, as I rolled out of bed, finally made the decision is that it's an entirely new song. Flipping open my phone, I saw the day, the time and everything under the sun. I wondered who on earth could be playing on the roof at seven in the morning on a Saturday. As I pulled on a bra, panties, and a set of comfortable clothes. The kind you could wear inside and slouch all day but if you left the house, you somehow felt you were underdressed in the prying eyes of the public. Even if you are sitting in the fast food place that rivalled entire nations in criminal activity, these were the clothes you would still feel underdressed in.

As I threw those clothes on, I thought about what person was up there. I have to admit, at first I thought it was some hipster wannabe, thinking he was John Lennon and Martin Luther King Junior all rolled into one. I had a few small fantasy as I opened up my apartment door of smacking a stereotypical hipster with his acoustic guitar covered in bumper stickers and political slogans. Climbing the stairs up to the the little room that held the ladder to the roof, I heard her voice for the first time. A beautiful soothing voice, the voice of, as I've said before, an angel. She was truly beautiful to hear, her voice sung of beautiful poetry and wonderful tunes. It was like hearing a person talk about something they were truly passionate about. Yet, it was more than that. It was like hearing someone sing about something they were passionate about, if they had the voice box of a temptress. It was like a siren without the ill effects of meeting one.

Climbing up the ladder, I pushed open the hatch and stared out. There, sitting cross legged, staring out at the rising sun, was a very beautiful girl. I know that sounds awkward, like how what a teenage boy would write in his journal, because they can't say diary, about the girl that got a crush on. Yet, I can't describe her anymore perfectly because I think I might confuse anyone with my description. All I can really say is that she had hair going down to her back, it curled in beautiful spirals, and it picked up the rising sun like it was an art structure that was made exactly for that purpose. An art piece that was made for the beautiful purpose of shining the sunlight in a specific way. She was sitting there, playing the beautiful music and singing to herself. Well, she thought she was singing to herself.

I couldn't understand a word she was saying. At the time it was in a language I couldn't understand, yet, when paired with that guitar, was the most beautiful thing I have ever heard. I felt like it was like hearing music for the first time in your life. Imagining living two decades of your life with no music, no elevator music, and then, out of nowhere, you hear the most beautiful music ever. To hear the Mozart's Ode of Joy for the first time. She had a beautiful voice that seemed to infect my soul. From the ladder, I called to her. I didn't really know what to say, so I said; "Do you play the guitar?". The most awkward thing I could have ever said as a first impression. She said "I do".

The exact same thing I said to her and the priest today.