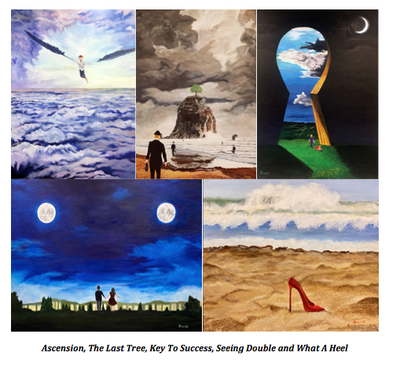 November 21st was a rainy night during this COVID-19 restricted year that has devastated lives, our economy and the way we live. It was also the Opening Night of my solo show at Good Weather Gallery in Edwardsville, Illinois.

Going into it, I didn't have too many expectations. I knew attendance was going to be down and that was a good thing - we didn't want more than 10 people in the gallery at a time to begin with.

Tom Jr. was going to provide the musical entertainment - which is always entertaining. I had bought a bunch of straws so people could sip their beverages without having to remove their masks.

I'm so grateful to Brooke Piepert, who is the owner and curator of Good Weather Gallery. She took a flying leap of faith in giving me a show - something that other gallery owners that I've approached here in the St. Louis metro area have been reluctant to do.

I'm beginning to think her leap of faith has paid off. At about the half-way point of this show, we have sold ten paintings.

The images you see in the two pics above are the ones that were bought. There are 32 of my paintings on display, so roughly 1/3 of the show has been spoken for. On top of that, multiple prints have been sold - both high gloss and a little more expensive semi-gloss printed on metal.

It's a great feeling. It's a weird feeling. Each painting I create takes several weeks from the initial concept to the time I sign my name on the canvas. You become attached to it. You think about how you could make it better. And then you reach a point where you deem it done.

The majority of my paintings reside in our house. Most of them are in storage, out of sight of even myself. I create the art. Then I share what I've done via social media and after that, it goes into hibernation.

So the chance to have a solo show at an art gallery where my work can actually be seen - and seen as a complete body of work - is an awesome feeling. I love creating surrealistic paintings and I must admit, it's a very surreal feeling to be surrounded by my work.

And it's an even better feeling to know that people really do like the work that I've been doing. I have now sold 16 paintings in 2020, more than any year previously. It inspires me to want to paint more - to use my God-given gifts of creativity and see where it takes me.

I'm not sure what else, if anything, will sell during the course of the show. There are several hanging there now that I will be almost sad if they do sell because I like them so much. Whether they do or not, my actions moving forward will remain the same - paint more and try and get better at what I do.

Greeting! I have always admired painters. Your paintings are beautiful. I wish you many more sales in the future, or I do not wish you, all depending on what your current wishes are ;-)