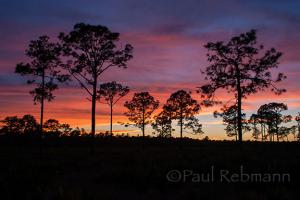 Since we are over a quarter of the way through 2014, I thought I would explain my "...years ago today" tweets. Since the beginning of 2014 almost every day I have posted on twitter.com/WildFlPhoto a photo that was taken on that date sometime in the previous fifteen years. In the first three months there were only six dates that I had not taken photos on.

In most cases I already had a photo posted on my Wild Florida Photo (wildflphoto.com) website, but there have been a number of times that I have had to pull a previously unused image from my archives to represent that date. An example of one of these is Sunset Pines.

This is an image that I made from the primitive campsites at Highlands Hammock State Park where I camped following a Florida Native Plant Society board meeting held at Archbold Biological Station.

In addition to showcasing the variety of my images, I have found this "..years ago today" exercise helpful in several aspects. For one thing, the daily deadline is forcing me to regularly review and process photos. This review has resulted in finding images that I had forgotten about and making me prepare others that I just never got around to doing anything with.

Some of other the images I have used on my website, or previously printed for sale at art shows and other events, I have now reprocessed with a more seasoned eye, resulting in what I feel are better images. After all, even Ansel Adams completely changed the look of some of his famous images, such as his iconic 1927 Monolith - The Face of Half Dome, which later in his career he printed in the high contrast style that most people think of when they hear his name.

With almost nine more months in this year, there are lots of photos, from 35mm film & slides, digital snapshot and three different digital SLRs, with even a few iPhone images to present to you. If you are not already doing so, follow me on twitter.com @WildFlPhoto to see each day's photo.