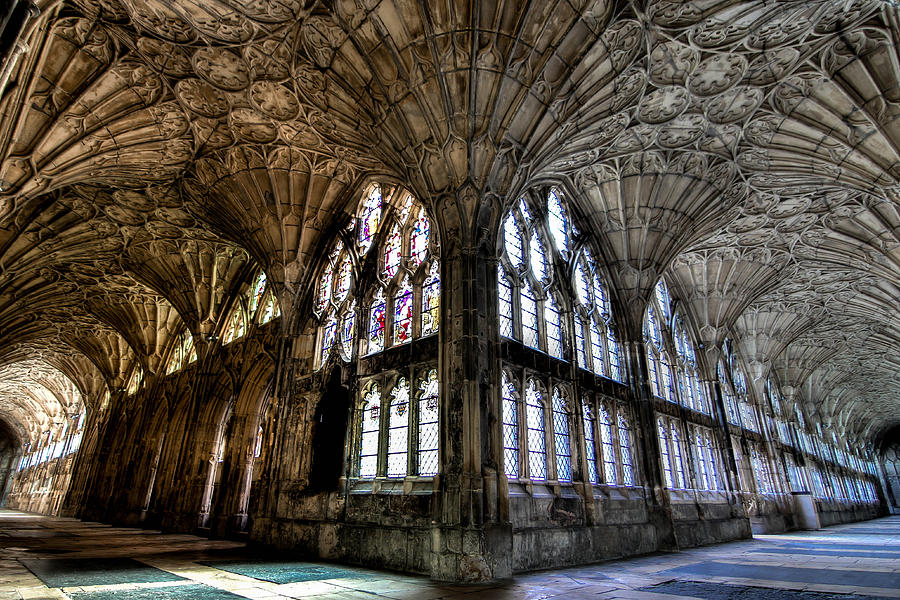 Cloister at Gloucester Cathedral is a photograph by Peggy Cooper-Berger which was uploaded on May 25th, 2015.

The cathedral, built as the abbey church, consists of a Norman nucleus (Walter de Lacy is buried there), with additions in every style of Gothic... more

The cathedral, built as the abbey church, consists of a Norman nucleus (Walter de Lacy is buried there), with additions in every style of Gothic architecture. It is 420 feet (130 m) long, and 144 feet (44 m) wide, with a fine central tower of the 15th century rising to the height of 225 ft (69 m) and topped by four delicate pinnacles, a famous landmark. The nave is massive Norman with an Early English roof; the crypt, under the choir, aisles and chapels, is Norman, as is the chapter house. The crypt is one of the four apsidal cathedral crypts in England, the others being at Worcester, Winchester and Canterbury.

The south porch is in the Perpendicular style, with a fan-vaulted roof, as also is the north transept, the south being transitional Decorated Gothic. The choir has Perpendicular tracery over Norman work, with an apsidal chapel on each side: the choir vaulting is particularly rich. The late Decorated east window is partly filled with surviving medieval stained glass. Between the apsidal chapels is a cross Lady chapel, and north of the nave are the cloisters, the carrels or stalls for the monks' study and writing lying to the south. The cloisters at Gloucester are the earliest surviving fan vaults, having been designed between 1351 and 1377 by Thomas de Canterbury.

The most notable monument is the canopied shrine of King Edward II of England who was murdered at nearby Berkeley Castle (illustration below). The building and sanctuary were enriched by the visits of pilgrims to this shrine. In a side-chapel is a monument in coloured bog oak of Robert Curthose, eldest son of William the Conqueror and a great benefactor of the abbey, who was interred there. Monuments of Bishop Warburton and Dr Edward Jenner are also worthy of note.

Stunning architectural wonder. Love so much how admirably you captured this remarkable old world structure-Great and interesting description :) /L/F/Tw

Thank you, Mike! It is a really special spot! They filmed some scenes of the Harry Potter movies here too :)

very cool photo great angle. you have a beautiful gallery too

Thanks so much, Alanna - I really enjoyed your gallery too :)

Wow! This is monumental, Peggy! Breathtaking! Congratulations on your feature of the month of August on The Gallery Wall Group. Well deserved. Loved/Favorited/Twitted!

Thank you so much, Andrea :)

An image like this makes me want to book a ticket to England just to see it in first person. Wow! What a great shot!

Worthy of accolades. Great eye for the composiiton.

Stunning L/F and Congrats on your contest win

Thank you all, my lovelies :)

Congrats on your win, Peggy! My question is: why are the walls leaning?

Thanks Jurgen. I would say it's a perspective thing - the camera was close to the ground to capture as much of the ceiling as possible. The image was in no way distorted if that was the question?