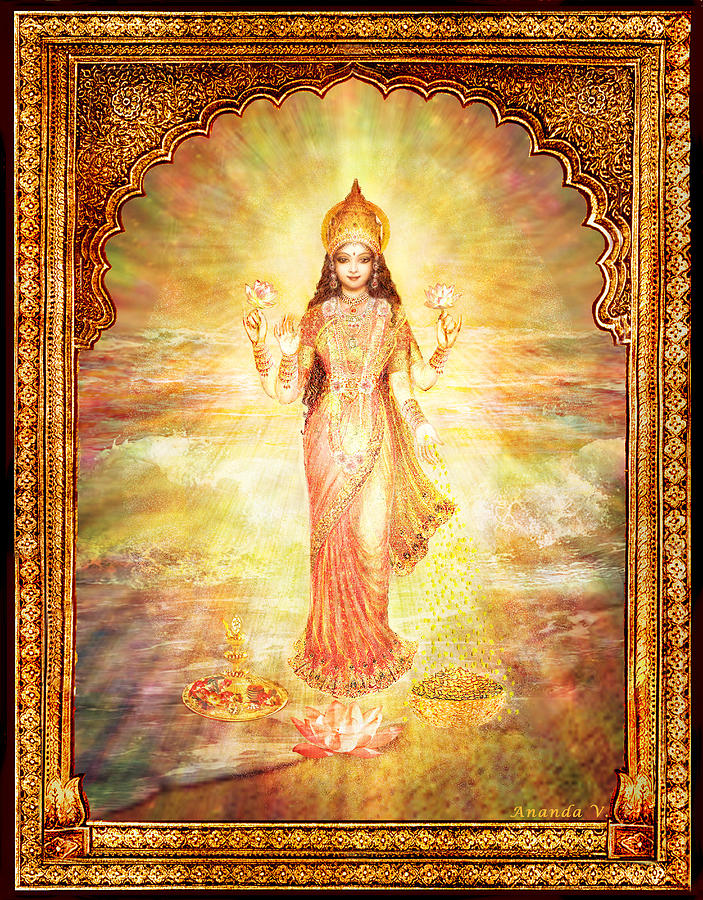 Lakshmis Birth From The Milk Ocean is a mixed media by Ananda Vdovic which was uploaded on July 26th, 2015.

Lakshmis Birth From The Milk Ocean

This painting shows a vision of Goddess Lakshmi, or Sri Devi, the Goddess of Fortune, Wealth, Abundance and Beauty. All eight forms of Wealth -... more

Lakshmis Birth From The Milk Ocean

This painting shows a vision of Goddess Lakshmi, or Sri Devi, the Goddess of Fortune, Wealth, Abundance and Beauty. All eight forms of Wealth - Ashta-Lakshmi - come from her. Like Aphrodite and Venus she is born from the ocean. Here she rises from the waves in an outburst of rainbow colored light, standing on her symbol, the lotus. The Goddess holds her hand in the blessing position, granting Abundance, Wealth, Success and all the wishes of her devotees. Some customers reported, that they had an increase in income after hanging this print.
The first drawing for this Lakshmi was done in 1994, when I lived in India and then I showed it to my spiritual master. He said: "THIS is IT !! Some people in Calcutta asked me, how Lakshmi, the Goddess of Fortune, looks, because they want to make a statue of her for the big Lakshmi Temple. I told them "When I come home, I will send you a picture of her face and hands. THIS is Lakshmis face ! They will make the marble statue for the temple after this drawing! " So the sketch was sent to the sculptor in Calcutta and the main statue (Murti) for the temple was made according to my drawing.
Later I created this colorful version of it.
For Vastu and Feng Shui the picture is best placed on the North or East side of the room.