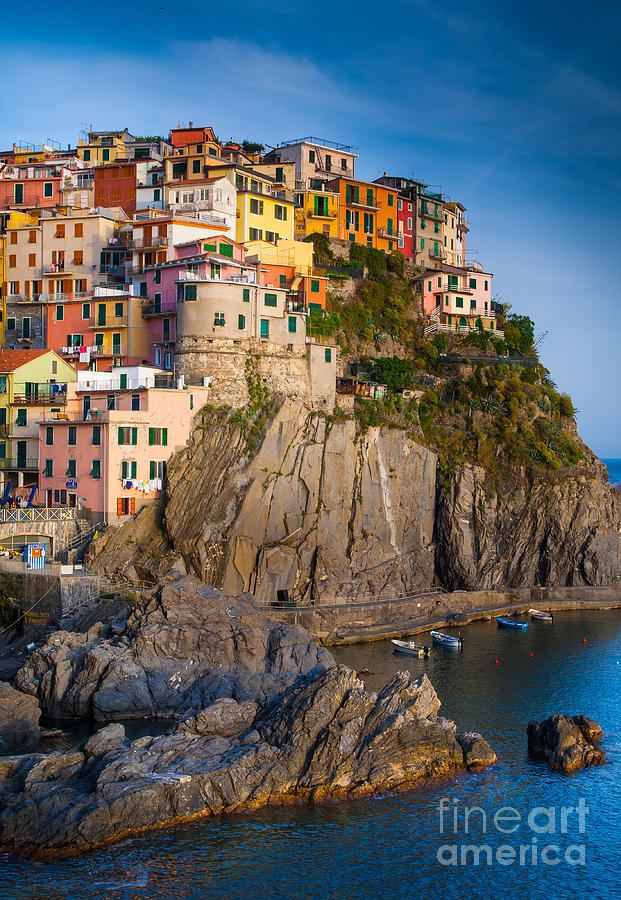 Manarola Afternoon is a photograph by Inge Johnsson which was uploaded on May 17th, 2014.

Town of Manarola in Italy's Cinque Terre national park
.....
Manarola is a small town, a frazione of the comune (municipality) of Riomaggiore, in the province of La Spezia, Liguria, northern Italy. It is the second smallest of the famous Cinque Terre towns frequented by tourists. Manarola may be the oldest of the towns in the Cinque Terre, with the cornerstone of the church, San Lorenzo, dating from 1338. The local dialect is Manarolese, which is marginally different from the dialects in the nearby area. The name "Manarola" is probably dialectical evolution of the Latin, "magna rota". In the Manarolese dialect this was changed to "magna roea" which means "large wheel", in reference to the mill wheel in the town. Manarola's primary industries have traditionally been fishing and wine-making. The local wine, called Sciacchetr�, is especially renowned; references from Roman writings mention the high quality of the wine produced in the region. In recent years, Manarola and its neighboring towns have become popular tourist destinations, particularly in the summer months. Tourist attractions in the region include a famous walking trail between Manarola and Riomaggiore (called Via dell'Amore, "Love's Trail") and hiking trails in the hills and vineyards above the town. Manarola is one of the five villages. Mostly all of the houses are bright and colourful. Manarola was celebrated in paintings by Antonio Discovolo (1874-1956)

Fantastic colors and scenery! Congrats on your sale!

I love the colors and architecture of this special place, Inge! very well done! FAV Jerry

Going to be there in June and can't wait, wonderful shot

This is gorgeous, Inge!! Congratulations on your sale!

Beautiful .. congratulations on your sale!!! Blessings!

lovely place to be

Great capture! I am always amazed how they put buildings on cliffs like this in Italy!

Your outstanding artwork has been chosen as a FEATURE in one of the most highly viewed Art Groups on Fine Art America. MOTIVATION MEDITATION INSPIRATION! From the hundreds of pieces of artwork received daily to review and choose from, your work has been chosen because of it's Excellence! Congratulations!

This is such wonderful work. The afternoon sun illuminates the brightly painted houses while the shade protects the small boats at the base of the cliff. It almost looks unreal. Favorite!

Congratulations on your feature in our group The Artistic Photographer!

What a great shot, beautiful colours.

I have featured this wonderful artwork in Images of Europe group on Fine Art America – congratulations!