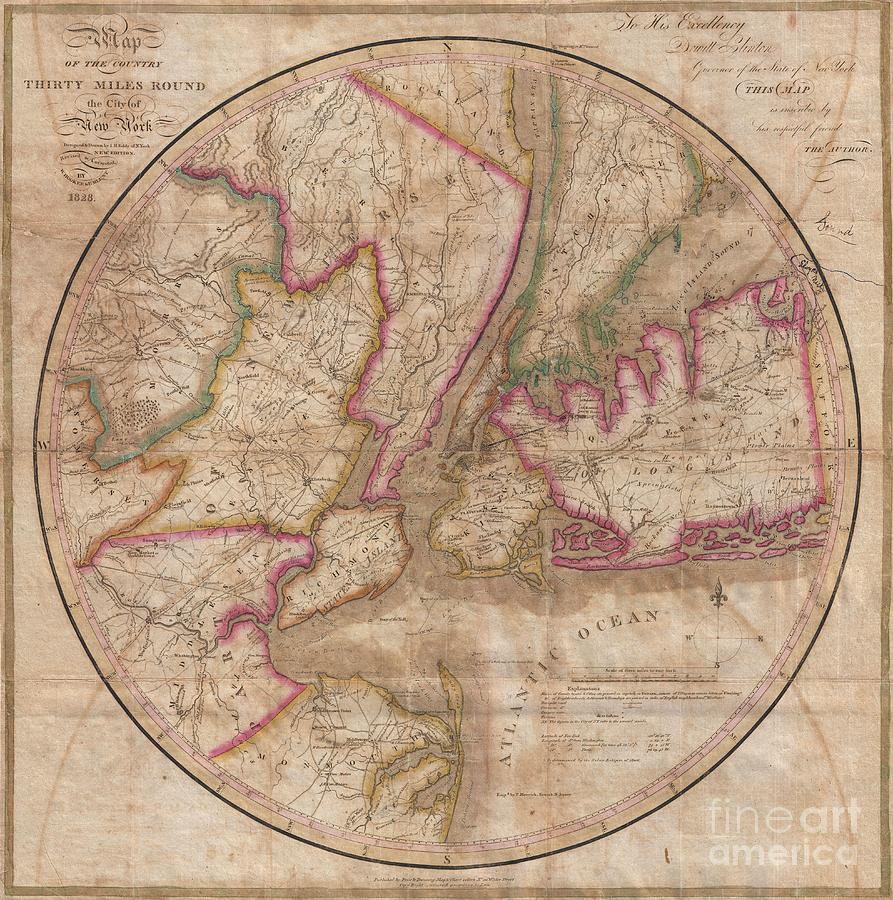 Known as The Eddy Map, this is an extremely rare and important circular map of New York City and vicinity, dated 1823. Covers the New York City area... more

Known as The Eddy Map, this is an extremely rare and important circular map of New York City and vicinity, dated 1823. Covers the New York City area in roughly a thirty mile radius of Manhattan, extending north to Tarrytown, south to Monmouth, west to Somerset, and east to Suffolk County. Isaac Stokes, in his 1928 classic on the iconography of Manhattan, calls this map one of the most complete, accurate, and beautiful early engraved maps showing New York and its environs. It is also recorded that Thomas Jefferson kept a copy of this map in his personal library. Eddy's map offers impressive detail of the entire region at a time of rapid change and urban development. Numerous family names and homesteads are noted, as are towns, toll booths (especially in New Jersey), canals, roads, proposed roadways, swamps, hills, forests, mineral deposits, bridges and ferries. Specifically identifies Yorkville (M), Harlem (M), Manhattanville (M), Bloomingdale (M), Brooklyn (B), Bedford (B), Bushwick (B), Williamsburg (B), Flatbush (Q), Flushing (Q) and Jamaica (Q), among countless other towns. This is the second edition of the Eddy map, published in guide format in 1828 by Hooker and Blunt. The first edition was published in 1811. Subsequent revised editions were released in 1836, 1839 and 1842. In 1846 J.H. Colton acquired the plates and significantly redesigned and re-engraved the plan adding contemporary urban detail, dropping out family names, and incorporating a large decorative border. Between the first (1811) and second (1828) editions, both of which were engraved by Peter Maverick, there are a number of minor revisions. Manhattan has been adjusted to reflect street grid developed for the 1811 Commissioners Plan and several family names, mostly in Manhattan, Queens, and Staten Island, have been altered. An elaborate dedication in the upper right hand corner reads, To His Excellency Dewitt Clinton Governor of the State of New York. This map is inscribed by his respectful friend, the Author. Dewitt Clinton was the sixth governor of New York State and sponsored many of the most important early mappings of the state. He died in 1828, the same year this map was published - though the dedication was also present in the 1811 edition. Subsequent editions of this map removed the dedication. This map was originally owned by the Embree family of Long Island. This prominent New York family immigrated to the United States in 1644 and most records associate them with Huntington Long Island and Flushing queens. Numerous members of the family are known to have been prominent lawyers and industrialists. Elihu Embree, of the most prominent members of the well to do family lobbied strongly against slavery and published an important anti-slavery newsletter titled The Emancipator . While all editions of this map are, for all intent and purposes, unobtainable, the first and second are the most highly regarded. There are several important examples of this map in major collections, including the New York Public Library, the Library of Congress, and the Rumsey Collection, however we have been unable to identify a single example of this map to appear on the open market in the last 40 years. Exceedingly scarce - a once in lifetime opportunity.