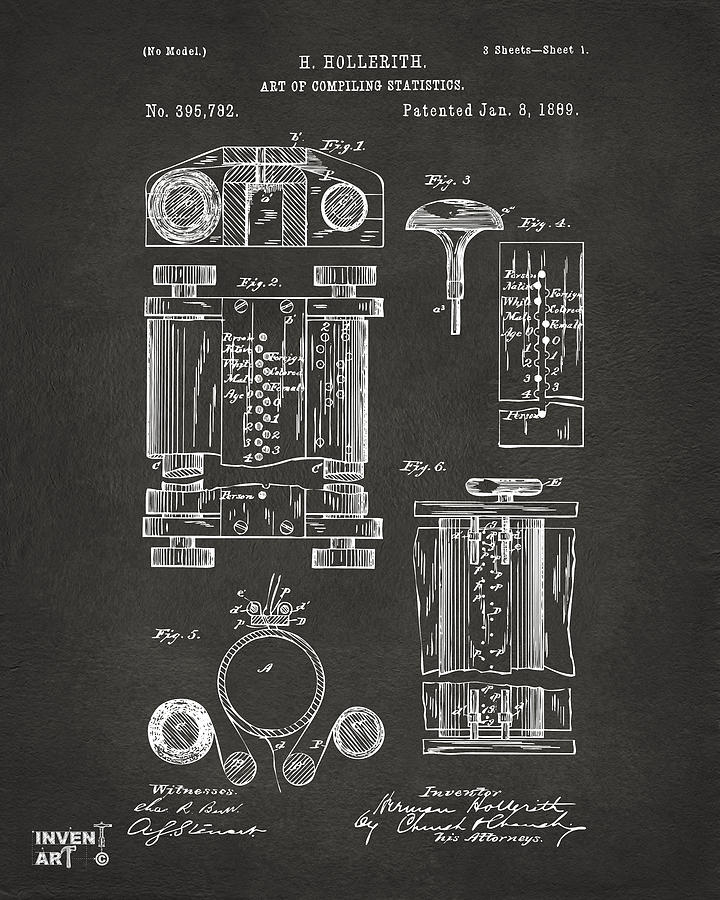 1889 First Computer Patent Gray is a piece of digital artwork by Nikki Marie Smith which was uploaded on August 13th, 2014.

This artwork series is based upon vintage US patent drawings of ingenious and notable inventions, in this case, an 1889 patent by American... more

This artwork series is based upon vintage US patent drawings of ingenious and notable inventions, in this case, an 1889 patent by American statistician Herman Hollerith, the father of modern machine data processing. His Electric Tabulating System was designed to use punched cards to quickly tabulate statistics from millions of pieces of data, reducing the time required to tabulate the U.S. Census data from eight years to only one year. The concept of encoding data by the locations of holes in a punched card as described in Hollerith's "Art of Compiling Statistics" patent continued to dominate the computing landscape for nearly a century. Herman Hollerith founded the Tabulating Machine Company, which later merged to form the International Business Machines Corporation (IBM.)

It would be another fifty years before John Vincent Atanasoff and Clifford Berry invented the first electronic computer in 1939, dubbed the ABC System. Hollerith's punch cards, later adapted to encode computer programs, continued in use for almost a century. This is a facinating piece of artwork with historical significance for anyone interested in computers or technology. (This patent artwork also available in a variety of styles.)

Patent artwork makes great conversational pieces and look amazing in offices, waiting rooms and lobbies as decorative wall art. Other rooms where patents work wonderfully include: game rooms, dens, man caves, dorm rooms, cottages, restaurants, or bars. Most people have a hobby, job or passion that can be linked to specific patents and inventions, making patent artwork a perfect gift for those difficult to shop for people who have everything.

You can see more of Nikki Smith's artwork on her website, http://BookSmithStudio.com or purchase fine art prints at http://nikkimarie-smith.artistwebsites.com

Congratulations on your recent sale of a wonderful work.

Congratulations on your sale Nikki.

Congratulation on your sale!!!!

Congratulations on your sale! F/L

Congratulations on your sale!! :-)