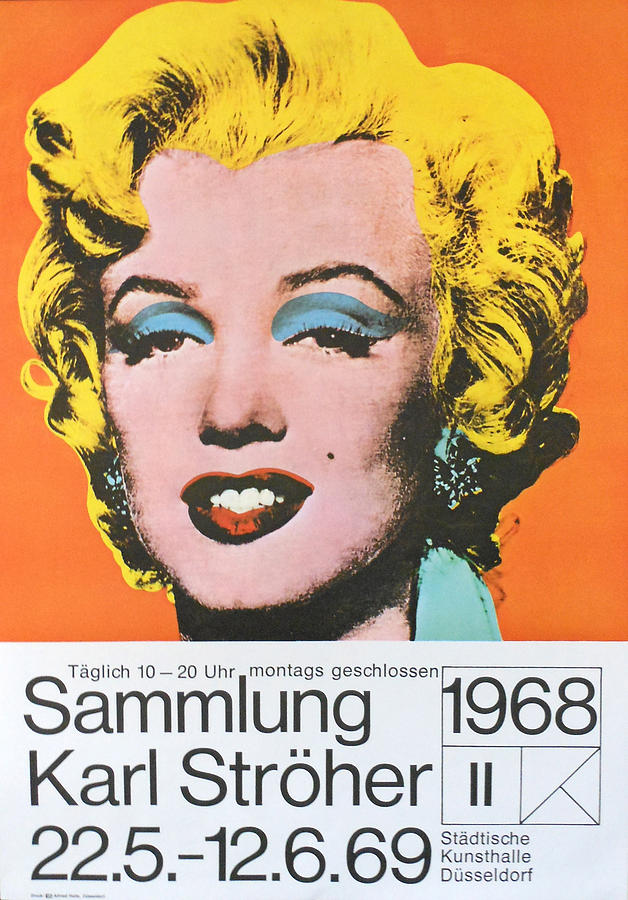 1969 Original German Exhibition Poster - Marilyn Monroe - Andy Warhol is a painting by Andy Warhol which was uploaded on September 9th, 2012.

About The Poster: Poster designed by Andy Warhol advertising an exhibit from the collection of Karl Ströher at the Dűsseldorf Art Gallery in Germany from May to June 1969. Karl Ströher was a German entrepreneur who collected many works of art . He was considered a collector with vision, and had not only acquired individual works, but also whole groups of works by one artist: for example by such American artists as Carl Andre, Dan Flavin, Donald Judd, Roy Lichtenstein, Walter De Maria, Claes Oldenburg and Andy Warhol. His collection also included the work of prominent German artists such as Joseph Beuys, Blinky Palermo, Reiner Ruthenbeck and Franz Erhard Walther. A highlight of the exhibit was a painting by Andy Warhol of Marilyn Monroe, which is featured on the poster. Printed by Alfried Holle in Dusseldorf.

About the Artist: Andy Warhol (August 6, 1928 - February 22, 1987) was an American artist who was a leading figure in the visual art movement known as Pop Art. His works explore the relationship between artistic expression, celebrity culture and advertisement that flourished by the 1960s. Warhol's artwork ranged in many forms of media that include hand drawing, painting, printmaking, photography, silk screening, sculpture, film, and music. From the autumn of 1962 onwards, Warhol's paintings were made almost exclusively by screen-printing photographic images on to coloured backgrounds. These works were executed with the help of assistants in the studio which he called 'The Factory'. (Source: Wikipedia)

This poster is in excellent condition.