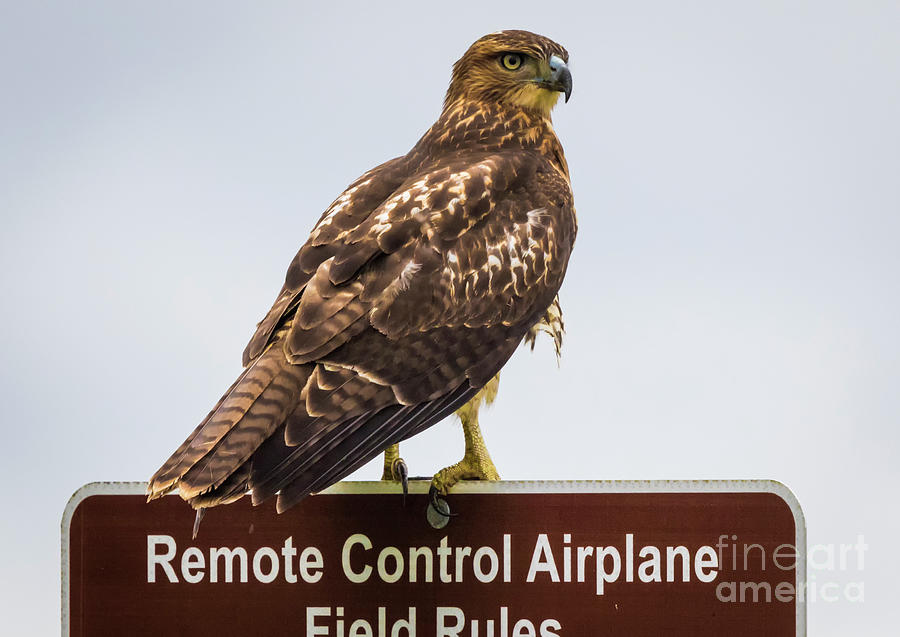 Juvenile Red-Tailed Hawk is a photograph by Ricky L Jones which was uploaded on August 22nd, 2016.

The red-tailed hawk (Buteo jamaicensis) is a bird of prey, one of three species colloquially known in the United States as the "chickenhawk," though it rarely preys on standard sized chickens.[2] It breeds throughout most of North America, from western Alaska and northern Canada to as far south as Panama and the West Indies, and is one of the most common buteos in North America. Red-tailed hawks can acclimate to all the biomes within their range. There are fourteen recognized subspecies, which vary in appearance and range. It is one of the largest members of the genus Buteo in North America, typically weighing from 690 to 1,600 g (1.5 to 3.5 lb) and measuring 45–65 cm (18–26 in) in length, with a wingspan from 110–145 cm (43–57 in). The red-tailed hawk displays sexual dimorphism in size, with females averaging about 25% heavier than males.[3] The bird is sometimes referred to as the red-tail for short, when the meaning is clear in context.
The red-tailed hawk occupies a wide range of habitats and altitudes, including deserts, grasslands, coniferous and deciduous forests, agricultural fields and urban areas. It lives throughout the North American continent, except in areas of unbroken forest or the high arctic. It is legally protected in Canada, Mexico and the United States by the Migratory Bird Treaty Act.
-wiki

Great portrait of a perched Red-Tailed Hawk, with great colors, details and perspective. The sign used as a perch symbolically highlights the encroachment of humans on the hawk's natural habitat. At some of the parks that I routinely bird, there are similar model airplane fields, and the operation of remote control airplanes definitely displaces raptors from potential hunting grounds. F/L

Thanks Morris, I always enjoy when they land on cool signs like this. One of my favorite ones is the Kestrel on a sign that say "Hunting Area" LOL