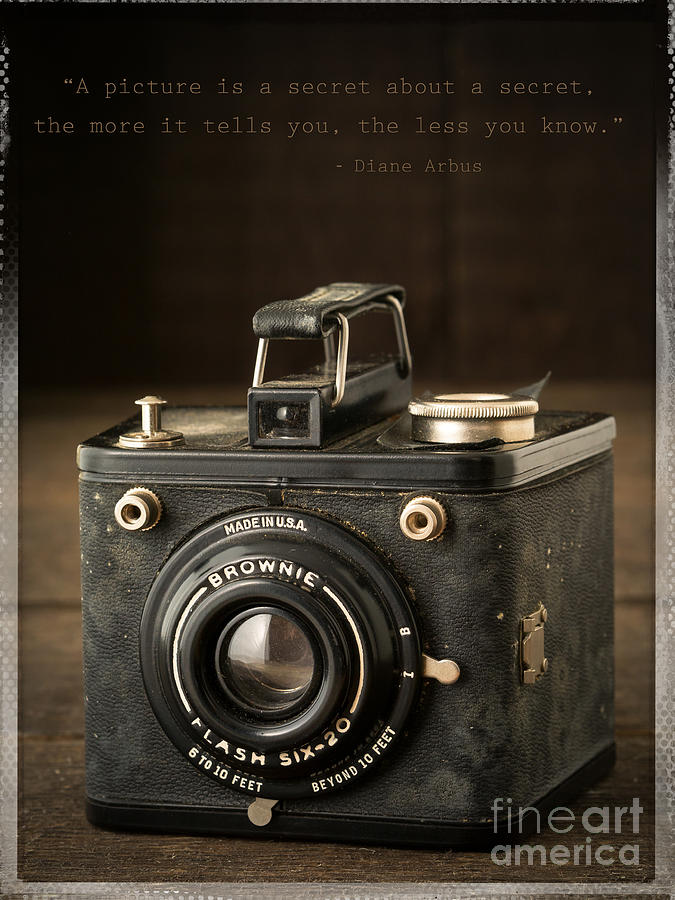 A Secret About a Secret is a photograph by Edward Fielding which was uploaded on December 22nd, 2012.

A Secret About a Secret

A picture is a secret about a secret, the more it tells you the less you know. ... more

A Secret About a Secret

A picture is a secret about a secret, the more it tells you the less you know.
― Diane Arbus

The Kodak Six-20 Flash Brownie was made in the USA by Kodak; it was a flash synchronised version of the Kodak Six-20 Brownie Special. It had a sheet-metal body, which could mount a large, unwieldy bulb flashgun. Exposures were 6x9 on 620 film.

Diane Arbus - Diane Arbus (pron.: /diːˈ�n ˈɑrbəs/; March 14, 1923 � July 26, 1971) was an American photographer and writer noted for black-and-white square photographs of "deviant and marginal people (dwarfs, giants, transgender people, nudists, circus performers) or of people whose normality seems ugly or surreal." Diane believed that a camera could be �a little bit cold, a little bit harsh� but its scrutiny revealed the truth; the difference between what people wanted others to see and what they really did see � the flaws. A friend said that Arbus said that she was "afraid . . . that she would be known simply as 'the photographer of freaks'"; however, that phrase has been used repeatedly to describe her.

Thanks to my buyer of a 6" x 8" print of "A Secret About A Secret" from Barnstable, MA. Enjoy!

Congratulations on your sale Edward! :-)

beautiful shot of an old camera!

Love the vintage image and the message. v