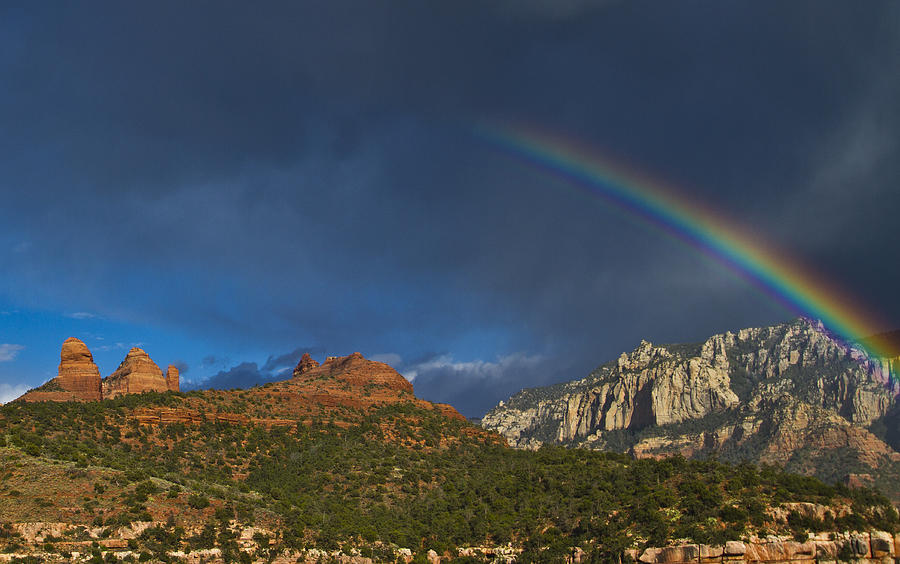 A Stitch in Time is a photograph by Tom Kelly which was uploaded on April 9th, 2013.

A Stitch in Time

Spring in Sedona offers much diversity. Rain, gusty winds, Snowstorms, and Rainbows. I captured this last Spring just at the southern tip of Oak... more

A Stitch in Time

Spring in Sedona offers much diversity. Rain, gusty winds, Snowstorms, and Rainbows. I captured this last Spring just at the southern tip of Oak Creek Canyon, my backyard. The Canyon is about 12 miles of beauty. The drive throughout the year can have streams, and sometimes waterfalls between beautiful red rock walls full of spectacular switchbacks, and scenery that is tough to top. The depth of the Oak Creek Canyon ranges between 800 to 2000 feet. Sedona is the second most popular destination in Arizona with visitors. One look , and you will understand why. The canyon is serene, calling, and calming. Oak Creek, a tributary of the Verde River, flows along the bottom of the canyon, and is always flowing here in the high desert of Northern Arizona. The creek is primarily responsible for carving this majestic masterpiece of nature, although movement along the Oak Creek Fault is believed to have had a role as well. Geologic evidence suggests the formation of Oak Creek Canyon along the fault about 8 to 10 million years ago. The walls of Oak Creek Canyon, which have been eroded by wind, water, and time, are Enchanting. They are composed of Palezoic Sedimentary rocks. After the canyon was formed, it was filled in by gravel, dirt and a series of Lava flows. Sometime between 6 and 8 million years ago, the fault became active again and the canyon started to change along the fault zone. The motion resulted in the west rim being about 700 feet higher than the east rim.
At the northern end of the canyon, you can find exposures of Kaibab Limestone. The most prominent rocks at the southern end near Sedona are reddish orange to white colored. They are primarily Permian Coconino Sandstone, as well as the red sandstones of the Permian Schnebly Hill Formation. The youngest rocks are basalt lava flows which are about 6 million years old. A part of the canyon has been designated Federal wilderness area as part of the Red Rock Secret Mountain Wilderness area. There are also several campgrounds, some picnic spots, and numerous hiking and photographic opportunities.
A Natural water slide, Slide Rock state Park lies in the canyon, as well as my fave photo area WestFork which is also called , Call of the Canyon., This trail is a must see , with beautiful Fall colors and dynamic winter photo scenes. . It is 14 miles long with very narrow sheer walls in an incredible canyon filled with water.

Thanks Irina! I appreciate your Thoughts!

Thanks so much to the sweet Folks who purchased A Stitch in Time Today!!

Jerry, rainbows are U.S., especially as the monsoons kick in!

As you probably know already, Tom, I love rainbows....Sedona makes this perfection!.........FAV / LIKE

Thanks Jim, I felt real Forunate with this one!

Awesome capture and landscape too! fv

Rainbows are always special and this landscape image is beautiful Tom! We Voted! Celebrate life, Debra and Dave

Thanks Debra and Dave!

WOW, nice catch Tom! I think I know about where you were standing... Congratulations on your feature! (v)

Right place, right time Jon, I was walking home from work, and a gift appeared!! Lucky me!!!

Thank You Nadine and Bob for your kind words and your hard work!!

We were pleased to see your work today in, "All Red Rock Country...." Congratulations, on your Features... Enjoyed seeing this unique example ... its one of our FAVORITES today .... We do not always Comment due to my disability, but just had to Comment on this beautiful piece of work.