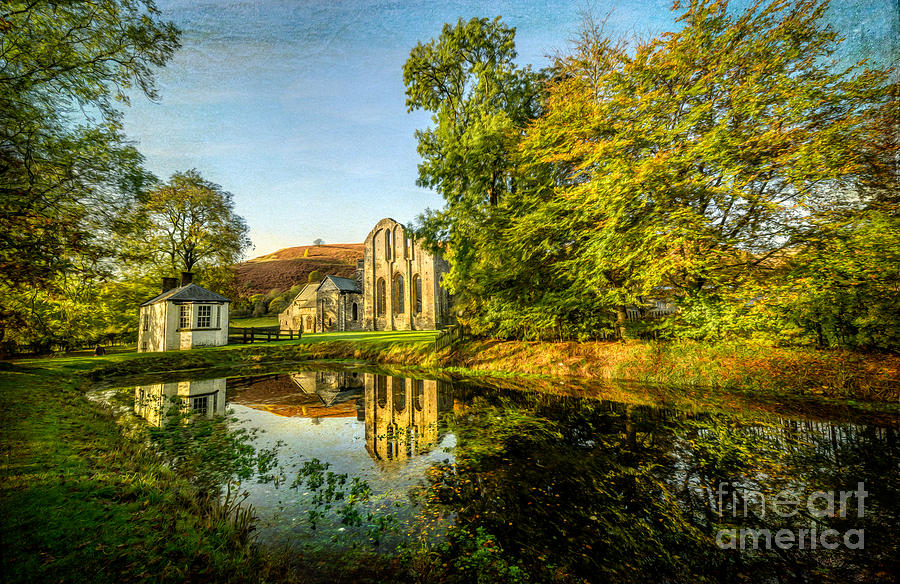 Abbey Lake Autumn is a photograph by Adrian Evans which was uploaded on November 8th, 2013.

Valle Crucis Abbey is a Cistercian abbey located in Llantysilio in Denbighshire, Wales. More formally the Abbey Church of the Blessed Virgin Mary, Valle Crucis it is known in Welsh both as Abaty Glyn Egwestl and Abaty Glyn y Groes, The abbey was built in 1201. The Abbey consisted of the church plus several adjoining out buildings which enclosed a square courtyard. The church itself ran West to East in the traditional cruciform style, today much of the original church is ruined, though the west end front wall survives, including the masonry of the rose window. The outbuildings including the adjoining east range, which survives mainly intact and the west range, which housed the lay brethren’s frater, but is now demolished. Completing the four sides of the inner courtyard was the southern frater and kitchen, which faced the church; these two building are also now ruins, with only foundation stones remaining. The east and west ranges housed the cloisters, with the east range also leading to the final structure, the abbot's lodgings which settled between the range and the church but outside the courtyard. The site is also home to the only remaining monastic fishpond in Wales.

As well as the west end front wall, extensive parts of the east end of the structures survive to the present day. The chancel walls, the southern part of the transept, the east range of the cloister together with the chapter house and sacristy and the lower part of the reredorter all survive mainly intact. In 1870 the west end wall was restored.

Thank you very much Val

Thank you very much Marvin

Thank you very much Rick

Thank you very much Jeff