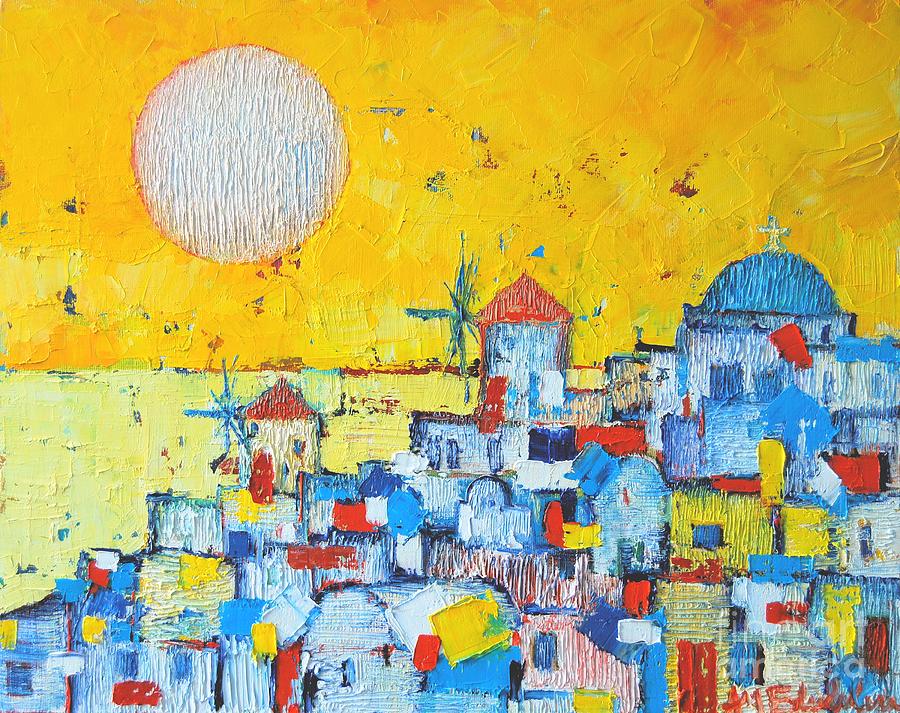 Abstract Santorini - Oia Before Sunset is a painting by Ana Maria Edulescu which was uploaded on August 17th, 2012.

THE ORIGINAL PAINTING HAS BEEN ALREADY SOLD TO AN ART COLLECTOR FROM AUSTRALIA. ... more

THE ORIGINAL PAINTING HAS BEEN ALREADY SOLD TO AN ART COLLECTOR FROM AUSTRALIA.
PRINTS AND CARDS ARE AVAILABLE FOR SALE.

This palette knife oil painting is part of my series ''Abstract cityscapes''. I started this series of abstract cities in 2012 and from then it is a recurrent theme for me. I love to paint abstract cityscapes under bold, vivid, sometimes tormented skies - yellow, pink, purple, orange, red, blue, turquoise, even green skies, sometimes skies ''inhabited'' by huge sun or full moon...

When I paint an abstract cityscape, I try to capture the essence of the subject, most an inner impression, a personal perception ... The city is not rendered, but suggested into an abstract manner by splashes of vibrant colors and impasto palette knife strokes.


In 2010 I spend my summer vacation in Santorini. From then I was definitively in love with this splendid Greek island.

Santorini (Greek: Σαντορίνη, pronounced [sadoˈrini]), classically Thera (pron.: /ˈθɪrə/), and officially Thira (Greek: Θήρα [ˈθira]), is an island in the southern Aegean Sea, about 200 km (120 mi) southeast from Greece's mainland. It is the largest island of a small, circular archipelago which bears the same name and is the remnant of a volcanic caldera. It forms the southernmost member of the Cyclades group of islands, with an area of approximately 73 km2 (28 sq mi) and a 2011 census population of 15,550. The municipality of Santorini comprises the inhabited islands of Santorini and Therasia and the uninhabited islands of Nea Kameni, Palaia Kameni, Aspronisi, and Christiana. The total land area is 90.623 km2 (34.990 sq mi). Santorini is part of the Thira regional unit.[2]
Santorini is essentially what remains after an enormous volcanic explosion that destroyed the earliest settlements on a formerly single island, and created the current geological caldera. A giant central, rectangular lagoon, which measures about 12 by 7 km (7.5 by 4.3 mi), is surrounded by 300 m (980 ft) high, steep cliffs on three sides. The main island slopes downward to the Aegean Sea. On the fourth side, the lagoon is separated from the sea by another much smaller island called Therasia; the lagoon is connected to the sea in two places, in the northwest and southwest. The caldera being 400m deep makes it possible for all but the largest ships to anchor anywhere in the protected bay; there is also a newly built marina in Vlychada on the southwestern coast. The principal port is called Athinias. The capital, Fira, clings to the top of the cliff looking down on the lagoon. The volcanic rocks present from the prior eruptions feature olivine and have a small presence of hornblende.[3]
It is the most active volcanic centre in the South Aegean Volcanic Arc, though what remains today is chiefly a water-filled caldera. The volcanic arc is approximately 500 km (310 mi) long and 20 to 40 km (12 to 25 mi) wide. The region first became volcanically active around 3�4 million years ago, though volcanism on Thera began around 2 million years ago with the extrusion of dacitic lavas from vents around the Akrotiri.
The island is the site of one of the largest volcanic eruptions in recorded history: the Minoan eruption (sometimes called the Thera eruption), which occurred some 3600 years ago at the height of the Minoan civilization. The eruption left a large caldera surrounded by volcanic ash deposits hundreds of metres deep and may have led indirectly to the collapse of the Minoan civilization on the island of Crete, 110 km (68 mi) to the south, through a gigantic tsunami. Another popular theory holds that the Thera eruption is the source of the legend of Atlantis.
Santorini was named by the Latin Empire in the thirteenth century, and is a reference to Saint Irene.


Oia (Greek: Οία, pronounced [ˈi.a]) is a former community on the islands of Thira (Santorini) and Therasia, in the Cyclades, Greece. Since the 2011 local government reform it is part of the municipality Santorini, of which it is a municipal unit.[2] It covers the whole island Therasia and the northwesternmost part of Santorini, which it shares with the municipal unit of Santorini. The population was 1,230 inhabitants at the 2001 census, and the land area is 19.449 km2. The population and land area are distributed as follows: 962 persons on 10.150 km2 in Santorini, and 268 persons on 9.299 km2 in Therasia.
Along the cliff of Oia, houses have been delved into the porous volcanic rock (left over from a large volcanic explosion many years ago that sunk the center of the island). Parts of these houses are visible and the scenery that results from it is generally perceived as being typically Greek. The town is noted for its picturesque architecture, unique for its blend of relatively large (for the town's space) medieval Venetian houses (dubbed "kapetanea" gr: "καπετανέα" - as they belonged to the captains) with small incave village homes, called "yposkafa" (gr: "υπόσκαφα", caved-in) which were the housing form of the rest of the town's population. This is a reminiscent of the age of Venetian rule over the island. Other attributes of this era are the large Catholic population as well as the medieval fortifications to protect from pirates. To this day laws protect the natural and architectural beauty of the town from modern manifestations, such as public electrical wires.


In the evening hordes of people arrive simply to watch its sunset. Every available seat, wall, step or patch of ground is occupied and picnicking while watching the sunset is almost de rigueur.


A common method for enjoying the sunset is to take one of the boat charters from the docks at Thira. After visiting the volcano in the middle of the caldera, the boat will visit the opposite island for a time before heading out a mile or so from the island. At sunset the boat will sail in a figure 8 until the sun goes below the horizon, providing a long view of the setting sun and ample photographic opportunities. ( Wikipedia )

There is such fabulous elegance in this one, and so much vibrancy! I love going through your gallery, taking a portion of happiness, unique colors !

Sold a gorgeous 30" x 24" Framed Print of Abstract Santorini - Oia Before Sunset. I am very grateful  to the buyer from Palos Heights, IL - United States

Thank you all very much for your kind congratulations on my sales of Abstract Santorini.

Congrats on your sale! Love the colors! L/F

Congratulations on your beautiful sale.

Thank you very much to the buyer from Decatur, AL - United States.

Congratulations on your sale Ana Maria!

Thank you so much to the buyer from Rochester, MN - United States who purchased a gorgeous large canvas print of my abstract cityscape Abstract Santorini - Oia Before Sunset palette knife oil painting.

Thank you so much to the buyer from Manalapan, NJ - United States for purchasing a beautiful framed and matted print of my Abstract Santorini - Oia Before Sunset palette knife oil painting.

Thanks a lot, Sunil.

Thanks very much, dear Melly.

Thank you so much to the buyer from London, United Kingdom who purchase and wonderful framed and matted print of my Abstract Santorini Oia sunset painting.

Thank you all so much, for your wonderful comments and kind congratulations. Appreciate a lot your support.

Lovely! Congrats on your sale!

Congrats on your sale Ana!

Wonderful - Congratulations on your sale!

One of your peers nominated this image in the 1000 views Groups nominated images by your fellow artist in the Special Features #7 promotion discussion. Please visit and pass on the love to another artist.