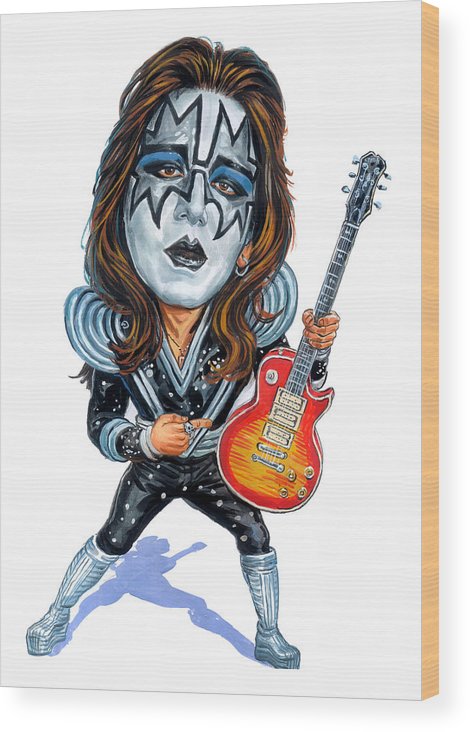 Ace Frehley wood print by Art .   Bring your artwork to life with the texture and added depth of a wood print. Your image gets printed directly onto a sheet of 3/4" thick maple wood. There are D-clips on the back of the print for mounting it to your wall using mounting hooks and nails (included).

Congrats on your sales. I like all of them though if it had not been for my daughter I would have never known who they are.

A most interesting style of the group members. Congrats on your sale!

Just beautiful! We love it! Especially since the superstition mountains are our backyard.

Beautiful rendering of a courageous man to admire.

Such a great addition to our home. The photos printed on wood look like paintings. And the hanging system that was included was perfect. So happy with our purchases!

I love both of my pieces of artwork. Go Dawgs.

Paul Daniel "Ace" Frehley (born April 27, 1951) is an American musician best known as the former lead guitarist and founding member of the rock band Kiss. He took on the persona of the "Spaceman" or "Space Ace", and played with the group from its inception in 1973 until his departure in 1982. After leaving Kiss, Frehley embarked on a solo career, which was put on hold when he rejoined Kiss in 1996 for a highly successful reunion tour. His second tenure with Kiss lasted until 2002, when he left at the conclusion of what was purported to be the band's Farewell Tour. His latest album Anomaly, was released on September 15, 2009. Guitar World magazine ranked him 14th Greatest Metal Guitarist of All Time. In a 2009 interview with Rock N Roll Experience Magazine, Ace stated, "I'm an anomaly, I'm an un-schooled musician, I don't know how to read music, but I'm one of the most famous guitar players in the world, so go figure." Source: Wikipedia.org

Our goal is artwork that will generate some smiles & laughter. We hope to bring you new art for eternity. Thanks for your support and God Bless!

All wood prints ship from our production facility within 3 - 4 business days of your order.