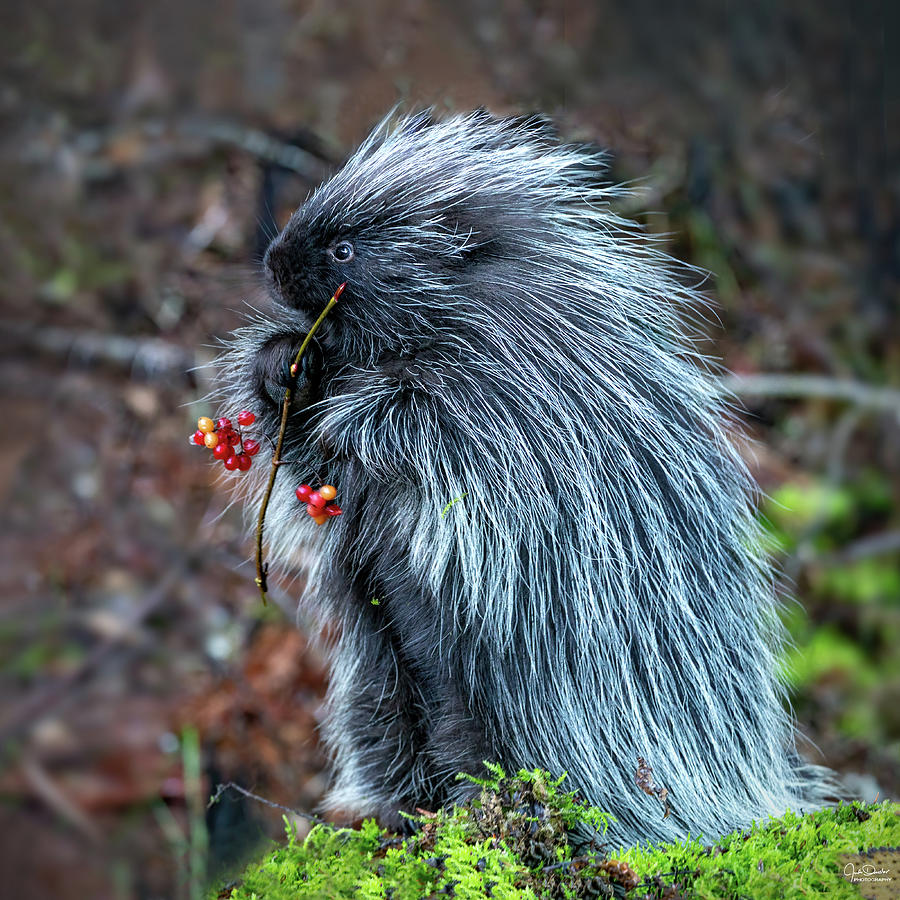 Adorable Porcupine is a photograph by Judi Dressler which was uploaded on November 30th, 2021.

Aren't I adorable? I think that should really be the title for this image, don't you(?), lol! This little Porcupine was so sweetly holding the... more

"Aren't I adorable?" I think that should really be the title for this image, don't you(?), lol! This little Porcupine was so sweetly holding the berries in one hand, but got disturbed by the photographer who wanted a picture! This guy or gal lives on private property near where we stayed on our trip to Alaska.

The North American porcupine is a rodent and an herbivore. It eats leaves, twigs and green plants like skunk cabbage and clover. In the winter, it may eat bark. It often climbs trees to find food. It is mostly nocturnal, but will sometimes forage for food in the day. The porcupine is a solitary animal, although it may den with other porcupines in the winter. It makes its den in caves, decaying logs and hollow trees. It doesn't hibernate, but may stay in its den during bad weather. The porcupine uses its quills for defense. It cannot shoot its quills, but when a predator approaches, the porcupine will turn its back, raise the quills and lash out at the threat with its tail. Those quills can become embedded in the animal and are hard to remove, since they are barbed. The porcupine is not an aggressive animal, though, and will only attack if it feels threatened

Judi, another amazing capture. I'll never know how you do it, but you must have limitless patience to wait for just that perfect moment. I love this. like/f

This is absolutely adorable

What a pose! Awesome!

Beautiful capture of this yes so adorable porcupine! l/f/t/p/fb

this is absolutely precious and a great photograph. L/F

That is a great shot Morris.

Stunning close up photograph of a Porcupine with great pose, clarity, colors, light, and composition! F/L

SOOOO Cute! And what a great image. LF.

Amazing! Quite wonderful in every way- the red berries and silver coat- the detail and fine focus- ***** LF

Thanks so much, Alida!

What an amazing capture, LF

Congratulations! .... Your wonderful work of art has been presented on the HomePage in the group, 'ART FOR PASSION - PASSION FOR ART'. Thanks for sharing with all of us. If you wish, you can archive it permanently or promote it further in the Discussions Tabs .... Nancy

Thanks very much for the feature, Nancy

What an awesome capture!