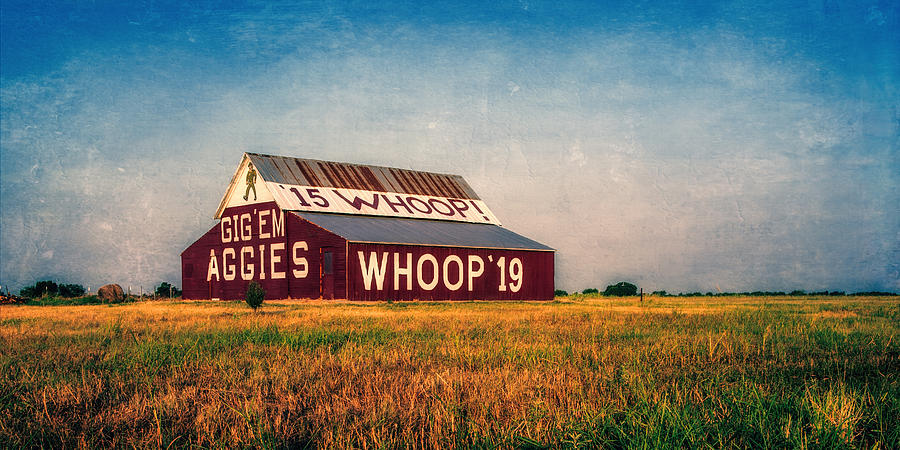 Every year the Aggie Barn is repainted with various contemporary graduation years of classes at Texas A&M. Last year (summer 2014 and through the... more

Every year the "Aggie Barn" is repainted with various contemporary graduation years of classes at Texas A&M. Last year (summer 2014 and through the early summer of 2015), it was painted with '15 Whoop! on the roof and Whoop '17 on the side. So I expected to see the years '16 and '18 painted this year. What happened? This is how it looks in late August 2015. After a little digging around I found out that the class year '15 displayed on the barn at this time represents the graduation year of one of the landowners' daughters. So perhaps that will remain for awhile. The "Aggie Barn' is a landmark on Route 6 just south of Reagan Texas, letting you know you have left Baylor country and are entering Aggie country! The barn was "started" by Mr. Thaggard Kirkpatrick. Known as Mr. T.K. by everyone in Reagan, Mr. Kirkpatrick was a Class of '24, 100% Aggie and his wife Mary was a graduate of Baylor. The center section of the barn reportedly was once the First State Bank of Reagan and sat in "Downtown Reagan". The building was moved to Mr. Kirkpatrick's property in the 1940s or 1950s, and originally painted red. In 1980, Mr. Kirkpatrick repainted it with Aggie Maroon after a windstorm blew some tin off the roof of the barn. Mr. Kirkpatrick at that time decided to repaint the barn as an expression of his love for Texas A&M. He had no idea of the landmark he was creating when he first painted "Gig'em Aggies" on the north end of the barn. The addition of "Whoop" and Class years were added in the 1990s by members of the Corp of Cadets. Due to road construction, the barn had to be relocated and now sits on property owned by the Swinnea family. The painting is done by the Swinnea family and friends.

many thanks to the buyer from Birmingham, AL for purchasing a greeting card with this print!

I love the color and texture in your photo! Beautiful work. Congrats!

Congrats on the sale Joan !!

Joan, Congratulations on your sale LF

Congrats on your sale Joan!

Congrats on your sale, Joan !