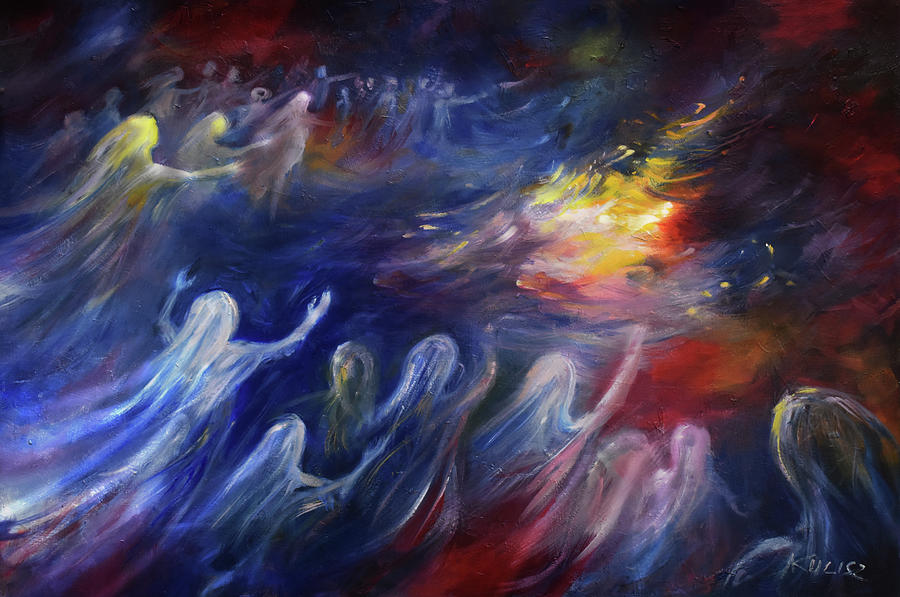 Ainulindale is a painting by Anna Kulisz which was uploaded on May 31st, 2015.

An illustration of the creation of the world from J.R.R. Tolkien's The Silmarillion, featuring Ainulindale, which is the song that created the world,... more

An illustration of the creation of the world from J.R.R. Tolkien's "The Silmarillion", featuring Ainulindale, which is the song that created the world, sang by all the Ainur.

„And it came to pass that Ilúvatar called together all the Ainur and declared to them a mighty theme, unfolding to them things greater and more wonderful than he had yet revealed; and the glory of its beginning and the splendour of its end amazed the Ainur, so that they bowed before Ilúvatar and were silent. Then Ilúvatar said to them: 'Of the theme that I have declared to you, I will now that ye make in harmony together a Great Music. And since I have kindled you with the Flame Imperishable, ye shall show forth your powers in adorning this theme, each with his own thoughts and devices, if he will. But I win sit and hearken, and be glad that through you great beauty has been wakened into song.'
Then the voices of the Ainur, like unto harps and lutes, and pipes and trumpets, and viols and organs, and like unto countless choirs singing with words, began to fashion the theme of Ilúvatar to a great music; and a sound arose of endless interchanging melodies woven in harmony that passed beyond hearing into the depths and into the heights, and the places of the dwelling of Ilúvatar were filled to overflowing, and the music and the echo of the music went out into the Void, and it was not void. Never since have the Ainur made any music like to this music.”

thanks a lot Tony!

Congratulations your outstanding artwork has been featured on the leading page of Impressionism group! Feel free to visit the group and view it there as it has been carefully arranged and displayed on our gallery wall. Excellent work! Lori

thank you for the feature!

Gorgeous and truly fascinating artwork, Anna. Love everything about it: colors, movement, perspective and most of all your masterly skills... L/F & serdeczne pozdrowienia !!