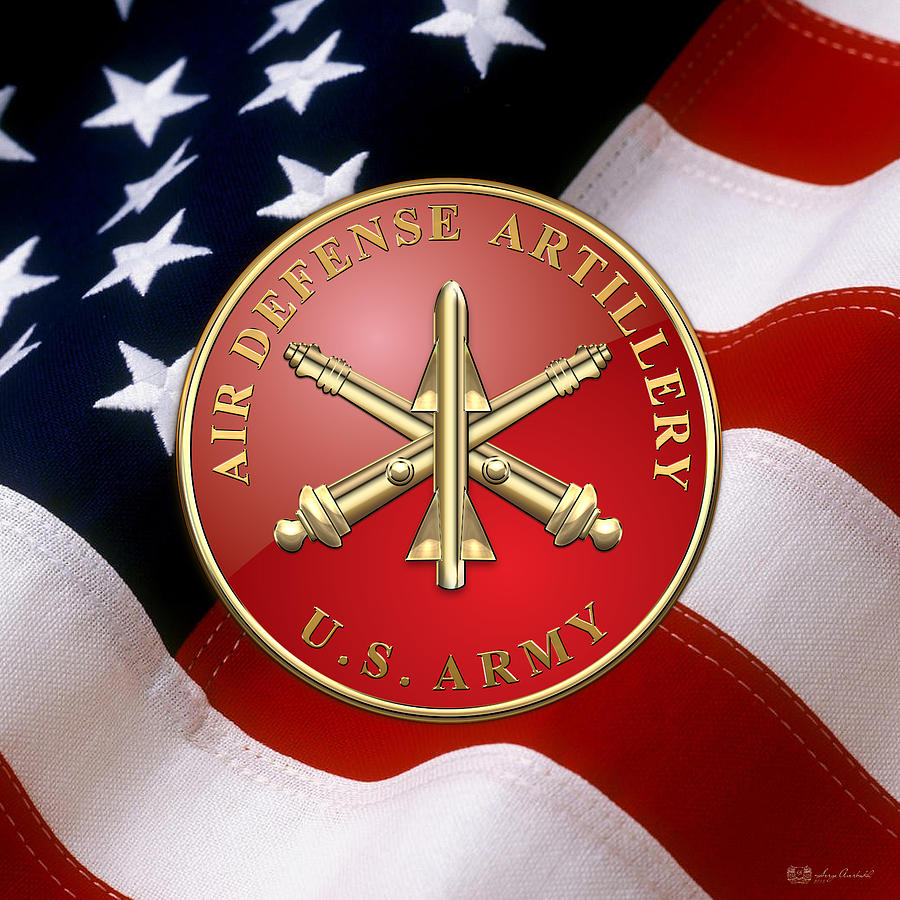 Air Defense Artillery - Ada Branch Insignia Over U. S. Flag is a piece of digital artwork by Serge Averbukh which was uploaded on October 10th, 2015.

Introducing 'Military Insignia & Heraldry' collection by Serge Averbukh, showcasing military and government heraldry artwork. Here you will find fine art pieces featuring Air Defense Artillery - ADA Branch Insignia over U. S. Flag.
17 November 1775. The Continental Congress unanimously elected Henry Knox "Colonel of the Regiment of Artillery" on 17 November 1775. The regiment formally entered service on 1 January 1776. Although Field Artillery and Air Defense Artillery are separate branches, both inherit the traditions of the Artillery branch. Air Defense Artillery refers to a combat arm that specializes in anti-aircraft weapons (such as surface to air missiles). These groups are composed of mainly air defense systems such as the Patriot Missile System, Terminal High Altitude Area Defense (THAAD), and the Avenger Air Defense system which fires the FIM-92 Stinger missile. The Air Defense Artillery branch descended from the Anti-Aircraft Artillery (part of the Coast Artillery Corps) into a separate branch on 20 June 1968. On 1 December 1968, the ADA branch was authorized to wear modified Artillery insignia, crossed field guns with missile. According to the Field Manual 44-100, the mission of Air Defense Artillery is "to protect the force and selected geopolitical assets from aerial attack, missile attack, and surveillance. On 10 October 1917 an Antiaircraft Service in the American Expeditionary Force (AEF) was created at Arnouville-Les-Gonesse where an antiaircraft school was established. The antiaircraft units were organized as serially numbered battalions during the war. The National Defense Act of 1920 formally assigned the air defense mission to the Coast Artillery Corps, and 4 battalions were organized in 1921. In 1924 under a major reorganization of the Coast Artillery the battalions were reorganized as regiments. In 1938 there were only 5 Regular and thirteen National Guard regiments, but by 1941 this had been expanded to 37 total regiments. In November 1942, 781 battalions were authorized. However, this number was pared down to 331 battalions by the end of the war. On 9 March 1942 Antiaircraft Command was established in Washington D.C. and in 1944 the AAA school was moved to Fort Bliss. ARAACOM was created July 1950, and in 1957, ARAACOM was renamed to USARADCOM. In 1957 the Combat Arms Regimental System organized the battalions under regiments again. In 1968 the Air Defense Artillery Branch was created. In 2010 the Air Defense Artillery School was moved from Fort Bliss to Fort Sill.
Branch Insignia consists of a missile surmounting two crossed field guns, all of gold colored metal,1 1/8 inches in height. Crossed cannons (field guns) for Artillery has been in continuous use since 1834, when they were played on regimental colors, knapsacks, and as part of the cap insignia for Artillery officers. An Act of Congress, 2 February 1901, divided the Artillery arm into Coast and Field Artillery and the insignia was modified by the addition of a plain scarlet oval at the intersection of the crossed cannons. On 17 July 1902, the Coast Artillery insignia was created by the addition of a gold projectile on the red oval. Concurrently, the Field Artillery insignia was created by the addition of a gold wheel on the red oval; this insignia was replaced by two crossed field guns (a lighter form of cannon), the design of which was approved on 4 April 1907. The Act of 1950 consolidated Coast and Field Artillery to form the Artillery Arm, and the crossed field guns was redesignated as the Artillery branch insignia on 19 December 1950. This insignia was superseded on 2 January 1957 by a new insignia consisting of crossed field guns surmounted by a missile, all gold. On 20 June 1968, Air Defense Artillery was established as a basic branch and on 1 December 1968, the ADA branch was authorized to retain the former Artillery insignia, crossed field guns with missile. The plaque design has the branch insignia, letters and border in gold. The background is scarlet.