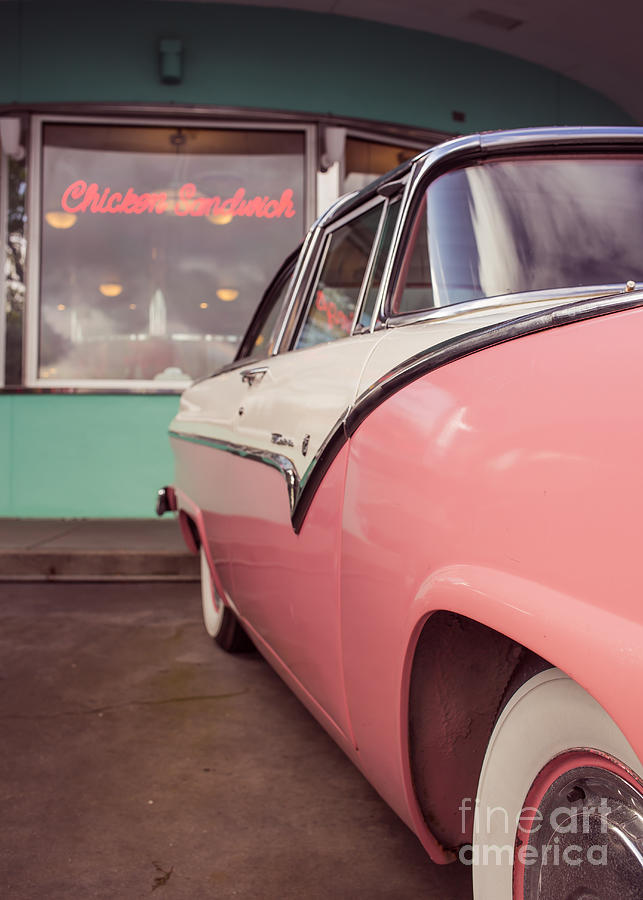 American Graffiti is a photograph by Edward Fielding which was uploaded on April 21st, 2014.

Note: The watermark in the lower right does NOT appear in the final print.
.....

Note: The watermark in the lower right does NOT appear in the final print.
.....

A classic vintage pink and white car at a 1950s diner. Fine art photography by Edward M. Fielding - www.edwardfielding.com
.....
Mel's Drive-In (not to be confused with Mel's Diner) is an American restaurant chain founded in 1947 by Mel Weiss and Harold Dobbs in San Francisco, California.

In October 1963, the Mel's Drive-In chain was picketed and subjected to a sit-in by the Ad Hoc Committee to End Discrimination over the fact that while the restaurant would serve food to African Americans and hired them as cooks, they were not allowed to work "up front" where they could be seen by white customers. More than 100 protesters were arrested. The picketing ended when Harold Dobbs, a San Francisco City Supervisor who had run for Mayor and lost, settled with the protesters and began to allow black workers "up front."

Mel's was used as a location in the 1967 film Guess Who's Coming to Dinner. Spencer Tracy and Katharine Hepburn are out for a drive and Tracy pulls into Mel's and orders Oregon Boysenberry ice cream, then has a minor traffic altercation with a black man. The Mel's was located in the Excelsior district of San Francisco. Katharine Hepburn and Spencer Tracy never actually visited the location.

In 1972, the restaurant was selected as a feature location by George Lucas for his 1973 film American Graffiti. The prominent play given to the location has been credited with having saved the company from possibly going out of business.The Mels used was located at 140 South Van Ness in San Francisco.

Mel's restaurants have since been featured in other media, such as Melrose Place (1996, Season 5, episode 1), Doonesbury comics (December 18, 1989), and the book The American Drive-in by Mike Witzel.

Some Mel's Drive-In locations are not actually drive-ins, but rather diners, although the sign still says "drive-in"; none of the San Francisco locations serve food to patrons' cars.
.....
Available for licensing via Arc Angel Images. http://www.arcangel.com/search/preview/a-classic-vintage-pink-and-white-car-at-a-1950s/0_00382457.html

Thanks to my buyer of a square METAL 24" x 24" print of "American Graffiti" from New York, NY. Enjoy!

Cool perspective...Congratulations on your sale!

Nice composition. Congratulations on your sale!

I LOVE the composition of this... great photo, Edward! F!