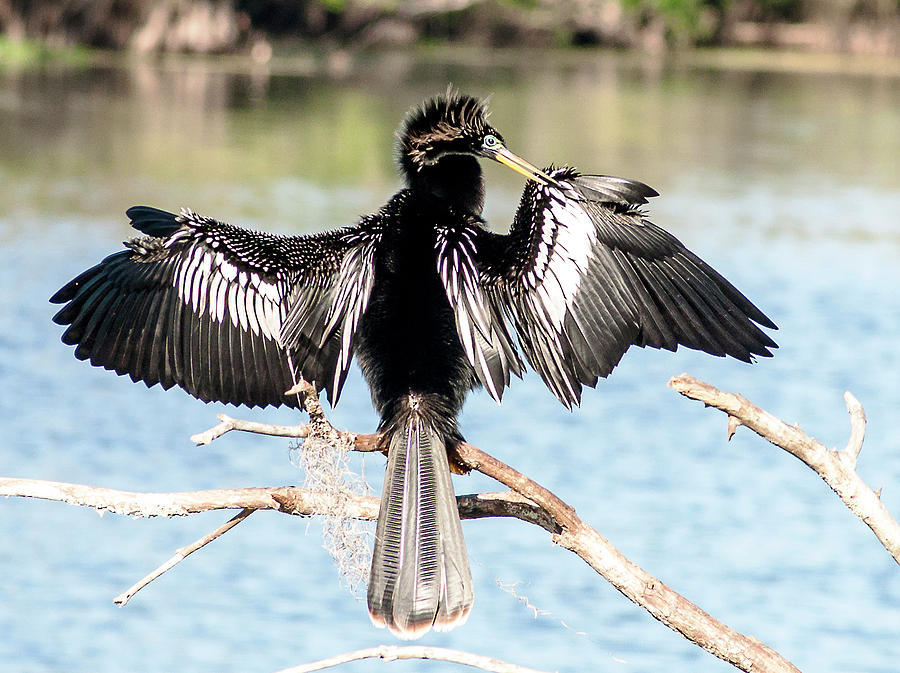 Anhinga Overlook is a photograph by Norman Johnson which was uploaded on May 19th, 2018.

An anhinga drying its wings on a branch overlooking the oxbow in Tampa, Florida's Lettuce lake Park.... more

An anhinga drying its wings on a branch overlooking the oxbow in Tampa, Florida's Lettuce lake Park.

The anhinga or American darter (anhinga anhinga) can be found throughout the Americas from the southeastern United States to Argentina. Because it lacks the oils and types of feathers used to keep birds warm, they are restricted to the warmer climes. It is also called the black darter, water turkey, or snakebird. For other names refer to the Cornell Lab of Ornithology site.

The anhinga roosts in trees and bushes near freshwater, or the brackish water found in bays, lagoons and tidal streams, to be near its food source. It catches its prey by diving, swimming slowly while stalking its prey, and then stabbing it with its pointed beak. They usually take their catch to shore to eat. Taking it off its beak by shaking it or beating it on the ground, the anhinga then tosses it into the air and catches it so that it can swallow it head first. Although the anhingas main diet is fish, they also feed on other aquatic animals like eels, snakes, crayfish, frogs, etc. Because the anhinga stalks its prey instead of chasing it, like the cormorant does, it swims slower than the cormorant and doesn't dive as deep.

An anhinga will often be seen swimming near the surface of the water with only its head and neck showing looking much like a swimming snake, which is how it got the name snakebird. Because it lacks the oils that most waterbirds use to coat their feathers, the anhinga's feathers become waterlogged, which make it

I'm really glad you like it Scott. Thank you very much for the feature in the group "FAA Portraits - Birds."

Norman, congratulations on your beautiful feature in Wild Birds of the World. f/l

Your beautiful and identified bird image has been featured by Wild Birds Of The World, a nature photography group. L/F

I'm really glad you like it William. Thank you very much for the feature in the group "Wild Birds Of The World."

Great capture of this beautiful Anhingha drying off, Norman. Perfect pose and love that feather detail.

Thank you very much Helen.

Thank you very much Robert.