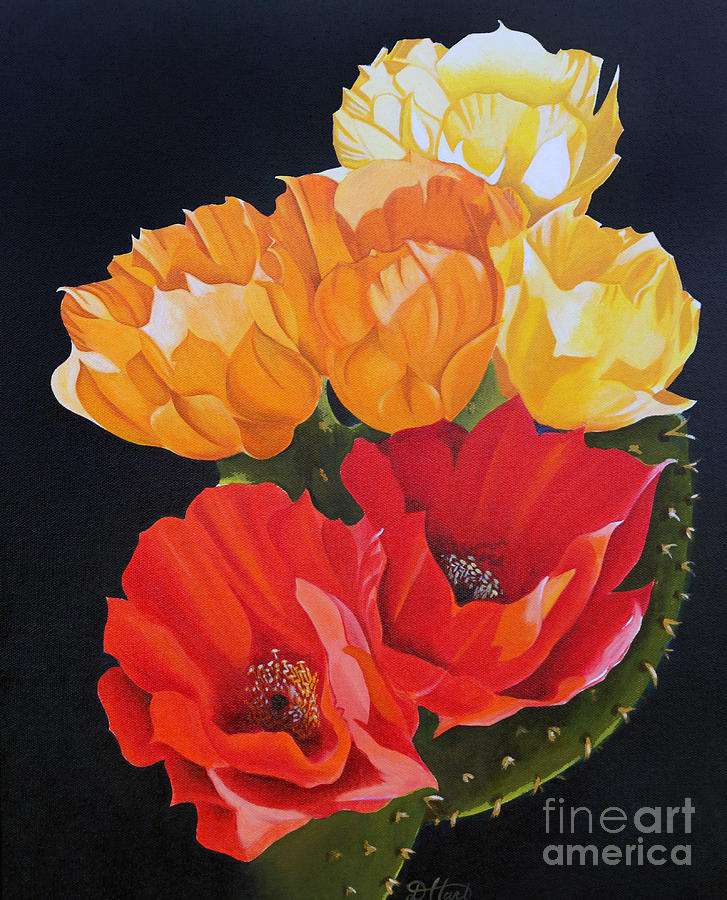 Arizona Blossoms - Prickly Pear is a painting by Debbie Hart which was uploaded on July 6th, 2011.

Original Oil on Canvas, 16 X 20. This painting started with more of a realistic approach. As I started painting, I realized I wanted to exaggerate... more

Original Oil on Canvas, 16 X 20. This painting started with more of a realistic approach. As I started painting, I realized I wanted to exaggerate the beautiful colors more by stylizing it a bit. I also originally had a lighter, more reddish background but again, wanted to make the blossoms stand out and be the center of attention. The original reference photo had less of a transition in colors and after several glazes I stood back and realized it might be more dynamic if I accentuated these colors by putting them in a red to orange to yellow flow.
I loved this simple approach so much I decided to try this on several other paintings; most of them the gorgeous cactus blossoms of the desert. I have a few started in different orders of completion and would eventually like to have a series of this style.

Prickly Pears all have flat, fleshy pads that look like paddles. The pads act as water storage, but also produce flowers. These plants have large spines, or leaves that produce small, wart-like projections on their stems.

The fruits of most prickly pears are edible. Prickly pear pads can be cooked and eaten as a vegetable. Both fruits and pads of the prickly pear cactus are rich in soluble fibers that experts are trying to link to helping keep blood sugars stable. Prickly Pear Nectar is available and made with the juice and pulp of the fruits. There has been other medical interests in the Prickly Pear plant. Some studies have shown that the pectin contained in the Prickly Pear pulp lowers levels of bad cholesterol while leaving good cholesterol levels unchanged.

Prickly pear cacti are found in all of the deserts of the American Southwest. Most require rocky, well-drained soil in dry regions.

Most prickly pear cactus have yellow, red or purple flowers. They vary in height from less than a foot to as much as 6 or 7 feet tall. The pads can vary in width, length, shape and color.

Opuntia, also known as nopales or paddle cactus (see below), is a genus in the cactus family, Cactaceae.

Currently, only prickly pears are included in this genus of about 200[1] species distributed throughout most of the Americas. Chollas are now separated into the genus Cylindropuntia, which some still consider a subgenus of Opuntia. Austrocylindropuntia, Corynopuntia and Micropuntia are also often included in the present genus, but like Cylindropuntia they seem rather well distinct. Brasiliopuntia and Miqueliopuntia are closer relatives of Opuntia.

Cheri! I owe you. BIG TIME! lol! Seriously, I can't tell you how much I appreciate what you do for me!

This is so beautiful, Debbie. You are very talented and your gallery is a joy to visit. v f

This is so beautiful, Debbie. You are very talented and your gallery is a joy to visit. v f

Congratulations on finishing near the top in "Go West"...great work~!

Thanks Guy! Maybe next time, huh? haha! Thanks for your comments and recognition!

Such a vibrant, gorgeous painting, Debbie! fav and v

Debbie, I especially appreciate the bold use of color in your paintings. This one shows such dramatic contrasts and makes a very eye-catching composition. Voted for this and 23 others in your gallery and posted it in the discussion of Wisconsin Flowers Group.

Thank you Annmarie! For everything!

Thank you so much Sandi! I've enjoyed your work so much as well.

I can't tell you how much I appreciate your wonderful comments and the votes, etc. Without support and encouragement from people like you, it's a very lonely path us artists take! Thank you SO MUCH!

Alan and Bob! Thank you both. Without you two, I'd be lost in the shuffle!

Kay and Heidi! Thank you both for being so supportive! I am so happy you visit me!

Gorgeous work, Debbie! Your attention to detail is spectacular!

Linde and Rhonda! I am so happy you took some time out to visit here as well.

Alan, Marcia, Anne, Brian: Your work is outstanding, I'm honored to have you visit me.