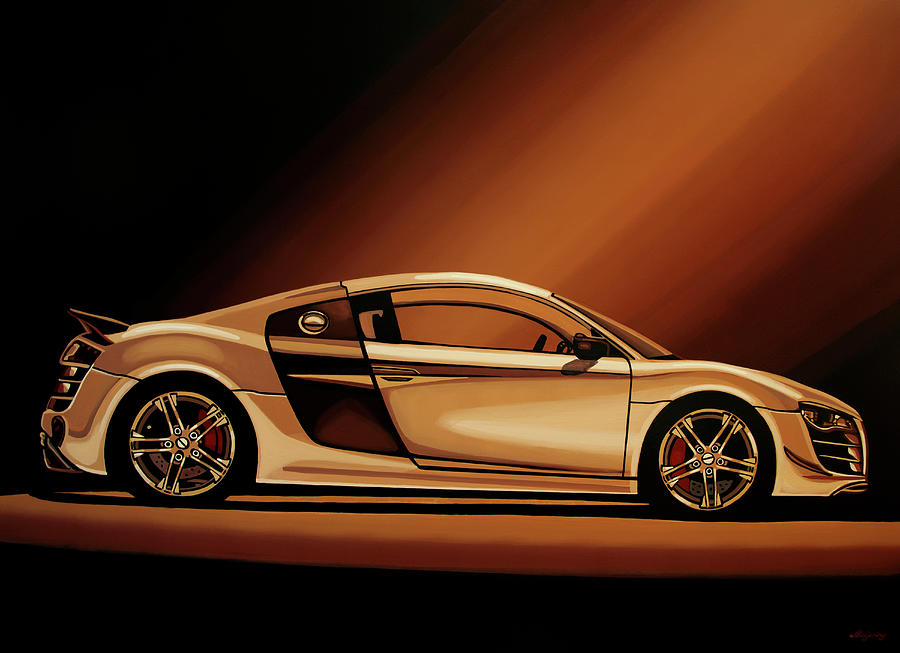 Realistic acrylic painting of the Audi R8, painted by the Dutch fine artist Paul Meijering - The Original painting is 90 x 120 cm and for... more

Realistic acrylic painting of the Audi R8, painted by the Dutch fine artist Paul Meijering - The Original painting is 90 x 120 cm and for sale

The Audi R8 (Typ 42) is a mid-engine, 2-seater supercar, which uses Audi's trademark quattro permanent all-wheel drive system. It was introduced by the German automaker Audi AG in 2006.

The car is exclusively designed, developed, and manufactured by Audi AG's high performance private subsidiary company, Quattro GmbH, and is based on the Lamborghini Gallardo platform. The fundamental construction of the R8 is based on the Audi Space Frame, and uses an aluminium monocoque which is built using space frame principles. The car is built by quattro GmbH in a newly renovated factory at Audi's 'aluminium site' at Neckarsulm in Germany.

In 2005, Audi announced that the name of the successful Audi R8 race car would be used for a new road car in 2007, the Audi R8, based on the Audi Le Mans quattro concept car (designed by Frank Lamberty and Julian Hoenig), appearing at the 2003 International Geneva Motor Show, and 2003 Frankfurt International Motor Show. The R8 development program began in 2004, Lamberty's design being approved and frozen for production. Production body prototypes began field testing in January 2006. The R8 road car was officially launched at the Paris Auto Show on 30 September 2006. There was some confusion with the name, which the car shares with the 24 Hours of Le Mans winning R8 Le Mans Prototype (LMP). 6-time 24 Hours of Le Mans winner Jacky Ickx described the R8 as "the best handling road car today".

It is also the first production car with full-LED headlamps

Wonderful use of color and geometricly angled lines resembling sun rays! Congratulations on your features!

Thank you so very much, David, for your support and the feature in your creative group!!;-))...