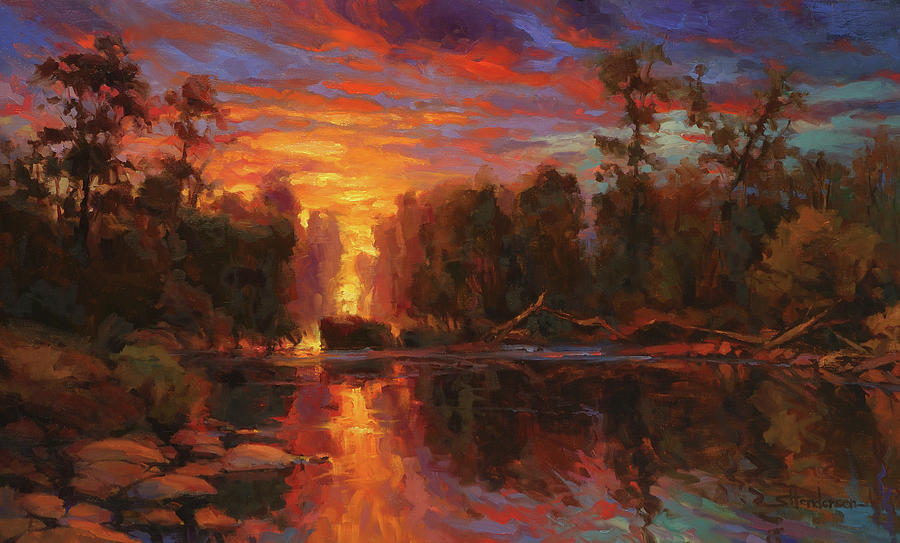 Awakening is a painting by Steve Henderson which was uploaded on May 2nd, 2017.

A new day dawns with a blaze of color, light, shadow, and promise.

This is an Awakening, which can be an aspect of the physical world, such... more

A new day dawns with a blaze of color, light, shadow, and promise.

This is an Awakening, which can be an aspect of the physical world, such as the dawn of every day. It can also be, and most importantly is, a metaphysical and spiritual situation as well – when a person awakens to life’s various truths, and never thinks the same again.

By spiritual, one is not confined to the concept of “religious,” and indeed, the further one steps from man-made religions with their dogmas and creeds and rules and regulations and requirements, the more likely one is to reach an actual awakening, because a system of laws and statutes is not one conducive to the questioning, the wondering, and the analysis required to seek truth.

Awakening, the artwork, sets the viewer before the light and color and perspective of dawn: light is the key, because without it, we see little or nothing, and what is seen is affected by shadow. But light – light shines on things that were in darkness and exposes them to sight. As the light grows stronger, it brings these hidden things into greater detail, and one can study them more closely.

In the beginning, when the light is just beginning, there is little detail – but the color and reflection are glorious. Such is the feeling, often, at the beginning of any quest for truth, when a little lights shines into the shadow world that we have so long inhabited. We see things we never saw before, in a way we could never imagine, and now that we have seen them, we long to learn more, to see more, to understand more.

“I never knew that was there!” we exclaim. “I thought it was just an empty, dark, space.”

No, there are no empty, dark spaces – but there are hidden elements that hide in shadow and darkness, working quietly in the background and hoping not to be seen or noticed.

But the sun rises every day, and at each dawn, there is opportunity to see, and discover, that which was hidden.

Third place winner (tied with On the Horizon, also by Steve Henderson) in the Sunrise Sunsets contest, August 2019.

this is gorgeous. L/F

Congratulations! Your beautiful painting has been featured on 2/27/2022 in the group Old Masters - Painters and Traditional Arts! Please visit the group’s Homepage and archive your feature in the Discussion thread. You will notice there is a new discussion thread for March and April.. Please use that one to respond with your thanks or comment when March gets here. Thank you.

CONGRATS!!! Your artwork has been selected for a Feature on the homepage of COMMENT FOR COMMENT GROUP! Please be sure to archive this featured artwork in the appropriate discussion thread.

CONGRATULATIONS! It is my great pleasure to FEATURE your artwork on the homepage of The Artists Group, 2/26/2022! You are invited to post it in the Group's Features Discussion thread for posterity or any other thread that fits!

Congratulations! Your skillful and interesting painting has been FEATURED on our Homepage, Painting the Old Way

To the buyer from Germany: May this artwork awaken in your heart and soul a sense of beauty and calm every time you look at it. Thank you.

Beautiful work, Steve!!! Congratulations, your work is Featured in "Your Best Work"! I invite you to place it in the group's "Featured Image Archive" Discussion!!

Such a beautiful scene with a colorful sunrise!

So much light and color! Beautiful painting

Steve, such wonderful use of firery colors, reflection and composition! Breathtaking! L/F