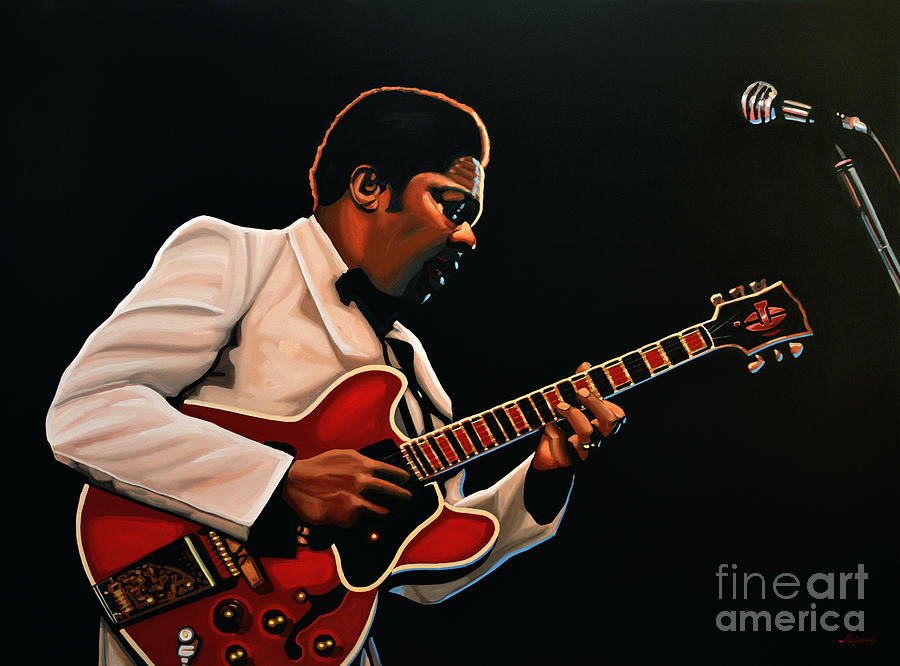 B. B. King is a painting by Paul Meijering which was uploaded on September 19th, 2015.

Realistic acrylic painting of the late American blues singer, songwriter, and guitarist, The King of the Blues; B.B. King, painted by the Dutch fine... more

Realistic acrylic painting of the late American blues singer, songwriter, and guitarist, The King of the Blues; B.B. King, painted by the Dutch fine artist Paul Meijering - the Original painting is 90 x 120 cm and for sale

Rolling Stone ranked King No. 6 on its 2011 list of the 100 greatest guitarists of all time. King introduced a sophisticated style of soloing based on fluid string bending and shimmering vibrato that influenced many later electric blues guitarists. King was inducted into the Rock and Roll Hall of Fame in 1987 and is considered one of the most influential blues musicians of all time, earning the nickname "The King of the Blues", and one of the "Three Kings of the Blues Guitar" along with Albert and Freddie. King was known for performing tirelessly throughout his musical career, appearing at more than 200 concerts per year on average into his 70s. In 1956, he reportedly appeared at 342 shows.

King died at the age of 89 in Las Vegas, Nevada on May 14, 2015 from complications of Alzheimer's disease along with congestive heart failure and diabetic complications.

has been featured on The Art Shoppe Cafe group homepage! Thank you for sharing your beautiful work with us! F/L 12.15.15

Thank you so much, Robyn, for your compliment, support and the feature in your fantastic group!!;-))

A incredible portrait and wonderful painting ! Wonderful light and colors in a wonderful vision of this unique Artist ! : )

Thank you so very much, Daniel, for your lovely compliments!!;-))

Thank you so much, John, for the feature in your exciting group!!;-))

Congratulations for the feature of your artwork on the Greeting Cards For All Occasions homepage 9-20-15!

Thank you so much, Jean, for the feature in your wonderful group!!;-))

Thank you very much, Majula, for your kind words!!;-))