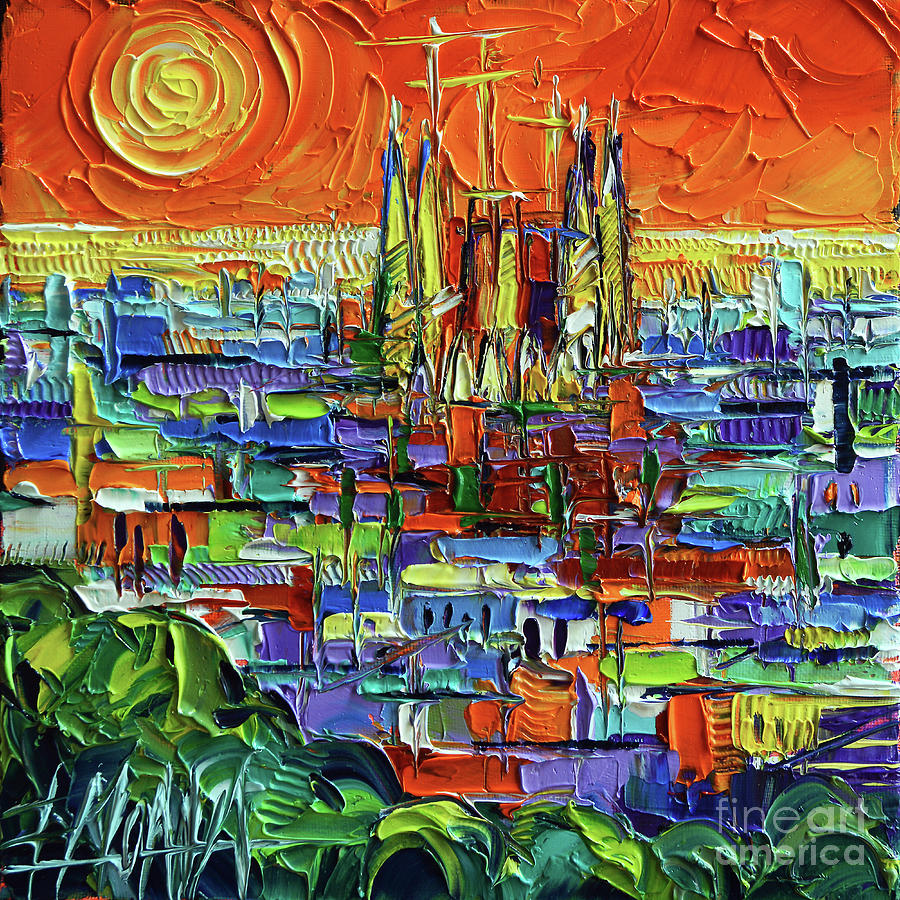 The original has been sold to a collector from San Jose, CA - United States.

This painting captures a panoramic view of Barcelona seen from the heights of Park Guell, with the silhouette of Sagrada Família profiled on a phantasmagoric orange sunrise... I was inspired to paint this scene during my last visit in Barcelona, earlier this summer.
This painting is part of my "Stylized City Views" series.

I made a Time Lapse video for this painting's process, you can watch it on my Facebook page, at https://www.facebook.com/monaedulescoart
/videos/2004249099627613/
(copy and paste the link into your browser)

I have always loved to approach my urban paintings in a myriad of ways. I enjoy stylizing architectural forms in various manners. This has always been one of my goals, even a preoccupation from the time I was studying at the school of architecture until the present. The versatility of oil paint along with my prototypic work with palette knives allows me to play with the urban forms abstracting the city in an unconstrained manner.

Describing Sagrada Familia, art critic Rainer Zerbst said, "It is probably impossible to find a church building anything like it in the entire history of art" and Paul Goldberger called it, "The most extraordinary personal interpretation of Gothic architecture since the Middle Ages."

The Basilica i Temple Expiatori de la Sagrada Familia (Basilica and Expiatory Church of the Holy Family) is a large Roman Catholic church in Barcelona, Catalonia (Spain), designed by Catalan architect Antoni Gaudi (1852-1926). Although incomplete, the church is a UNESCO World Heritage Site and in November 2010 Pope Benedict XVI consecrated and proclaimed it a minor basilica, as distinct from a cathedral, which must be the seat of a bishop.
Construction of Sagrada Familia had commenced in 1882 and Gaudi became involved in 1883, taking over the project and transforming it with his architectural and engineering style, combining Gothic and curvilinear Art Nouveau forms. Gaudi devoted his last years to the project, and at the time of his death at age 73 in 1926, less than a quarter of the project was complete. Sagrada Familia's construction progressed slowly, as it relied on private donations and was interrupted by the Spanish Civil War, only to resume intermittent progress in the 1950s. Construction passed the midpoint in 2010 with some of the project's greatest challenges remaining and an anticipated completion date of 2026, the centenary of Gaudi's death. (source: Wikipedia)

Awesome Mona! Congrats on your sale!

Thank you so much Ann!

Thank you for the buyer from Minneapolis, MN for purchasing two beautiful prints (one framed) of my "Barcelona Orange View" oil painting!

Thank you so much, Johanna!

Thank you so much for the feature Madalena!

Congratulations - Your beautiful picture has been featured in the "Travel Art" group!

Thank you so much for the feature Tatiana!

Thank you so much Chris! ❤

What a nice comment, dear Seth. Thank you very much!!

This is so breathtaking! Your time lapse video is so captivating! I watched it again and again!

Thank you so much Oiyee! I am happy you liked it! Actually me too I like to watch it...it is so satisfying. :))

Thank you very much Zsanan!

Thank you so much Joel!

Your paint style is so expressive. It must take gobs of paint to make such a painting. Well done!

Thanks a lot Mario! Yes, in the impasto technique we are using lot of paint, you are right...

Brava, Mona! What a glorious work of art! So fabulous the way you capture the spirit and passion of Gaudi's work! l/f

What a beautiful comment dear Nanci! Thank you so much! :)

Another stunning painting ...L/F and my FAV in Women Painters Group.

Thank you so much Carmen, you are so nice!

This is luscious Mona. That sky is just amazing. Really fine work. LF!!

Thank you so much dear Bob! :)

Mona your colors are so bright, brilliant and clean. I love it and enjoy the crisp texture also.

Thank you so much Larry!

Thank you very much dear Helena!!!

I love the shapes and love the gorgeous colors! Beautiful work Mona! l/f!

Thank you very much, Dusan.

Thank you very much, Robin.

David, thanks so much for the feature!

Thank you very much, Iulian! Multumesc. :)