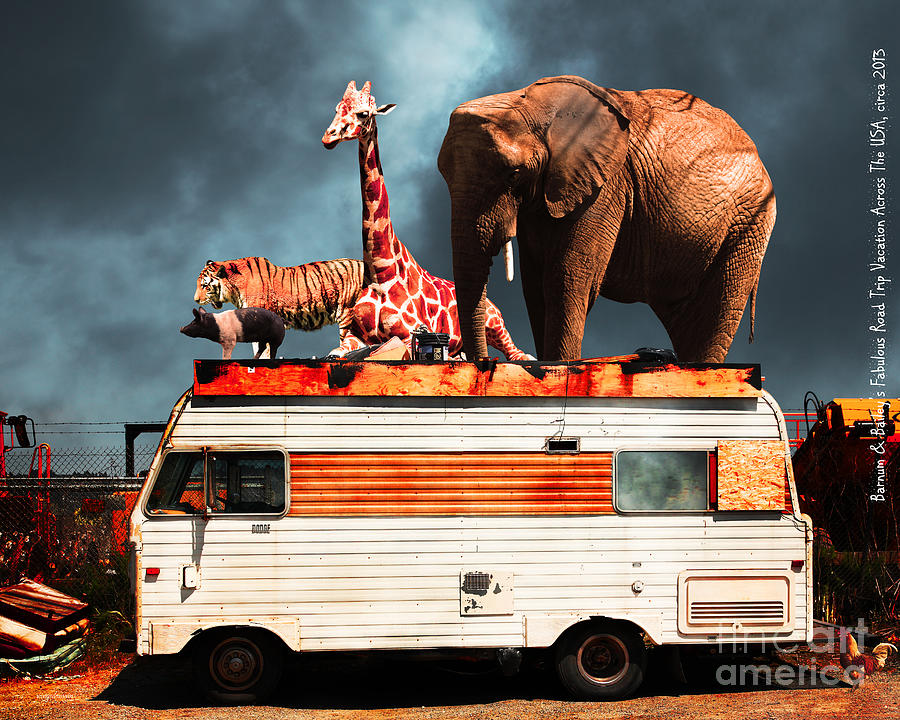 Barnum and Baileys Fabulous Road Trip Vacation Across The USA Circa 2013 5D22705 with text is a photograph by Wingsdomain Art and Photography which was uploaded on September 4th, 2013.

Barnum and Baileys Fabulous Road Trip Vacation Across The USA Circa 2013 5D22705 with text... more

How else did you think James and PT go on vacation? It's not like you can just drop off a tent full of circus animals at a doggy day care. And your neighbors can only take maybe one giraffe, at best another pig, but the whole circus act is just too much to impose on your neighbors. Just think of all the flak you will get for the rest of your live if you left your elephant with your neighbor and they soon realize picking up after an elephant is nothing like just picking up after your dog at all! So wake the neighbors and pack up the Winnebego because this Barnum and Bailey circus act is going on a Summer roadtrip vacation across the good ol' US of A! I'm just hoping Denny's have learned to flush their pipes from the last time we'all made a pit stop at their fine establishment, they should NEVER have served us the Grand Slam Breakfast! -W

Barnum and Bailey takes his act on the on a road trip vacation across the US of A! A fun filled art work satire that's sure to liven up any room, whether it be your office, your home, or any public space.

Ringling Bros. and Barnum & Bailey Circus is an American circus company billed as The Greatest Show on Earth. The circus, known as Ringling Bros. and Barnum & Bailey Combined Shows, was started in 1919 when the circus created by James Anthony Bailey and P. T. Barnum was merged with the Ringling Brothers Circus. The Ringling brothers had purchased the Barnum & Bailey "Greatest Show on Earth" following Bailey's death in 1907, but ran the circuses separately until they were merged in 1919. On July 16, 1956 at the Heidelberg Race Track in Pittsbugh, Pennsylvania the circus ended its season early, with President John Ringling North announcing that it would no longer exhibit under their own portable tents and starting in 1957 would exhibit in permanent venues, such as sports stadiums and arenas that had the seating already in place. In 1967 Irvin Feld and his brother Israel, along with Houston Judge Roy Hofheinz bought the circus from the Ringling family. In 1971 the Felds and Hofheinz sold the circus to Mattel, buying it back from the toy company in 1982. After the death of Irvin Feld in 1984 the circus has been a part of Feld Entertainment, an international entertainment firm headed by Kenneth Feld. -wikipedia


This type of artwork would look terrific on a large canvas or as a metal print, and a print on any other media would look just as stunning!

Thank you buyer from Page, AZ for the purchase. I am eternally grateful and humbled and I thank you for contributing to my obsession - Art and Photography. www.wingsdomain.com www.facebook.com/wingsdomain

Thank you Joseph, much appreciated. -W

I love it. Very cool! Though I am glad they now move these animals via train! LOL

Congratulations on your Art sale!

Thank you Z, means a lot to me coming from you, much appreciated. :-) -W

Utterly gorgeous artwork!!! You are so talented and very inspirational, Wings, in all your art!!!!

Thanks Bill, Christina, and Lazaro. -W