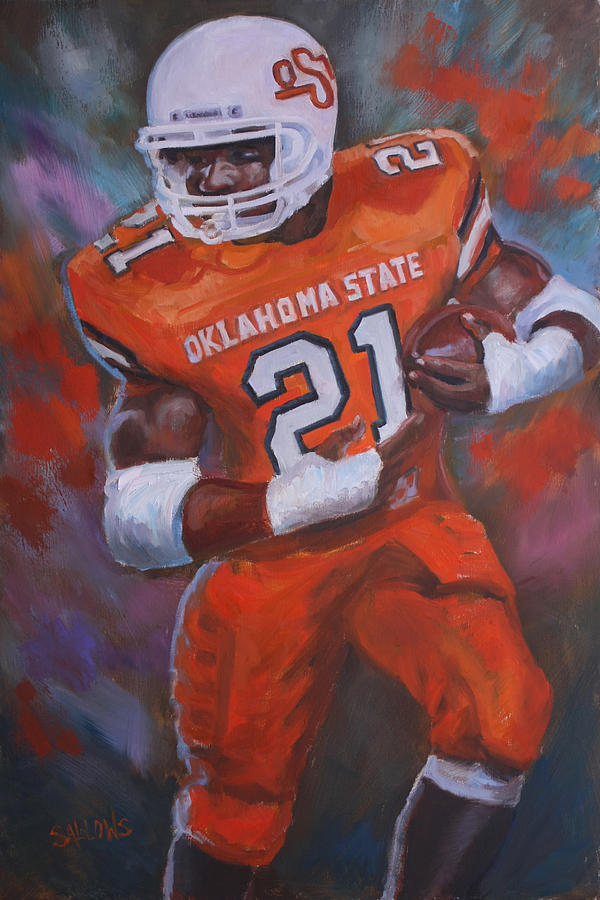 Barry Sanders, Oklahoma State is a painting by Nora Sallows which was uploaded on October 26th, 2015.

Enrolling at Oklahoma State University, Sanders played for the Oklahoma State Cowboys from 1986 to 1988, and wore the #21. During his first two... more

Enrolling at Oklahoma State University, Sanders played for the Oklahoma State Cowboys from 1986 to 1988, and wore the #21. During his first two years, he backed up All-American Thurman Thomas. In 1987, he led the nation in yards per kickoff return (31.6), while also rushing for over 600 yards and scoring 8 touchdowns. Thomas moved on to the NFL, and Sanders became the starter for his junior year.

In 1988, in what has been called the greatest individual season in college football history,[6] Sanders led the nation by averaging 7.6 yards per carry and over 200 yards per game, including rushing for over 300 yards in four games. Despite his massive workload of 344 carries, Sanders was still used as the team's punt and kickoff returner, adding another 516 yards on special teams. He set college football season records with 2,628 yards rushing, 3,248 total yards, 234 points, 39 touchdowns, 37 rushing touchdowns, 5 consecutive 200 yard games, scored at least 2 touchdowns in 11 consecutive games, and 9 times he scored at least 3 touchdowns. Sanders also ran for 222 yards and scored 5 touchdowns in his three quarters of action in the 1988 Holiday Bowl, a game that is not included in the official NCAA season statistics.[7] Sanders learned of his Heisman Trophy win while he was with the team in Tokyo, Japan preparing to face Texas Tech in the Coca-Cola Classic.[8] He chose to leave Oklahoma State before his senior season to enter the NFL draft.