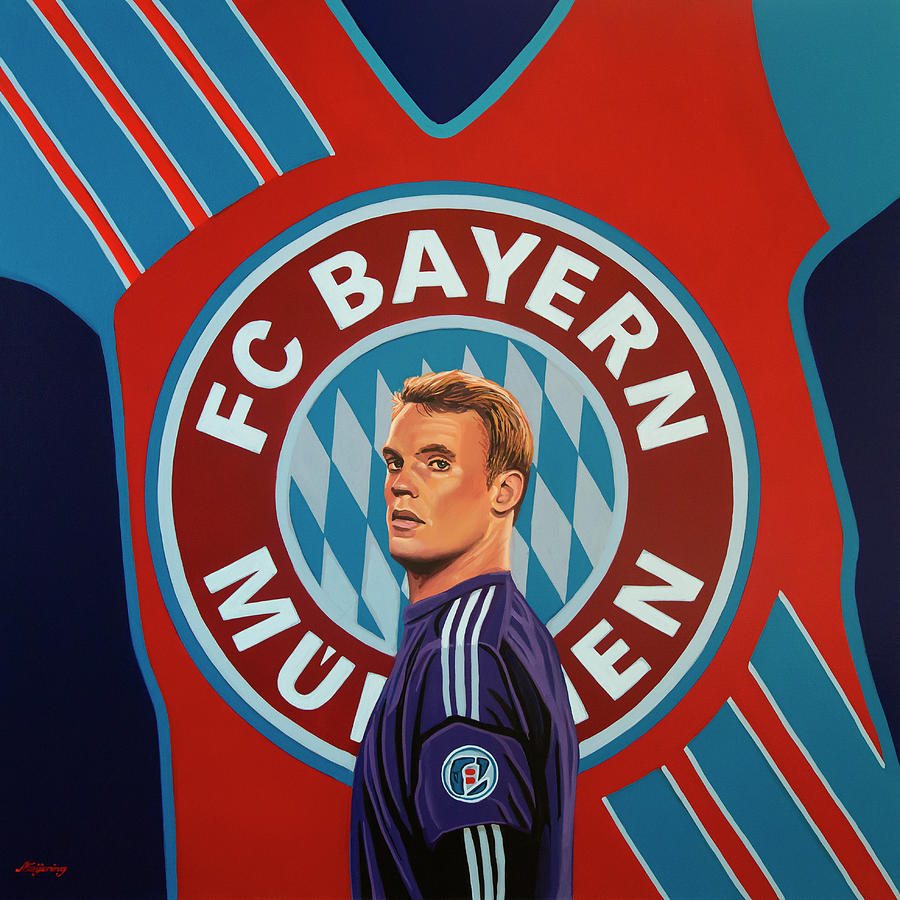 Bayern Munchen Painting is a painting by Paul Meijering which was uploaded on September 13th, 2017.

Realistic acrylic painting of the German professional footballer and goalkeeper Manuel Neuer at Bayern Munich, painted by the Dutch fine artist Paul Meijering - the Original painting is 90 x 90 cm and for sale

Manuel Peter Neuer (born 27 March 1986) is a German professional footballer who plays for Bundesliga club Bayern Munich and the Germany national team. He is a goalkeeper and serves as captain for Bayern Munich and captain of Germany. Neuer has been described as a "sweeper-keeper" because of his unique playing style and speed when rushing off his line to anticipate opponents; he is also known for his quick reflexes, excellent shot-stopping abilities, strength, long throwing range, command of his area and accurate control and distribution of the ball.
Regarded by pundits as the best goalkeeper in the world (he is the current holder of the IFFHS World's Best Goalkeeper award, which he has won for the past four consecutive years since 2013), and as one of the best and most complete goalkeepers of all-time, Neuer won the 2014 FIFA World Cup with Germany as well as the Golden Glove award for being the best goalkeeper in the tournament, and is considered by some in the sport to be the best goalkeeper in football since Lev Yashin.

In 2014, Neuer finished third in the voting, behind Lionel Messi and Cristiano Ronaldo, for the FIFA Ballon d'Or award. The same year, he was ranked the third-best player in the world by The Guardian.

Fußball-Club Bayern München e.V., commonly known as FC Bayern München, FCB, Bayern Munich, or FC Bayern, is a German sports club based in Munich, Bavaria (Bayern), Germany. It is best known for its professional football team, which plays in the Bundesliga, the top tier of the German football league system, and is the most successful club in German football history, having won a record 27 national titles and 18 national cups.

FC Bayern was founded in 1900 by 11 football players, led by Franz John. Although Bayern won its first national championship in 1932, the club was not selected for the Bundesliga at its inception in 1963. The club had its period of greatest success in the middle of the 1970s when, under the captaincy of Franz Beckenbauer, it won the European Cup three times in a row (1974-1976). Overall, Bayern has reached ten European Cup/UEFA Champions League finals, most recently winning their fifth title in 2013 as part of a continental treble. Bayern has also won one UEFA Cup, one European Cup Winners' Cup, one UEFA Super Cup, one FIFA Club World Cup and two Intercontinental Cups, making it one of the most successful European clubs internationally and the only German club to have won both international titles. Since the formation of the Bundesliga, Bayern has been the dominant club in German football with 27 titles and has won 9 of the last 13 titles. They have traditional local rivalries with 1860 Munich and 1. FC Nürnberg, as well as with Borussia Dortmund since the mid-1990s.