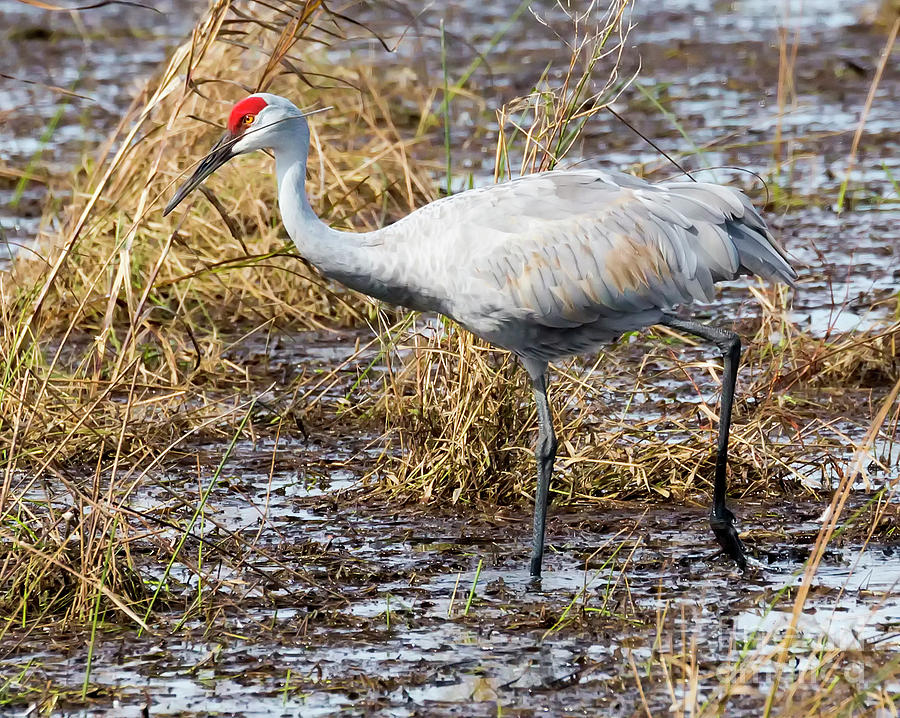 Beautiful Day for a walk -Sandhill Crane is a photograph by Ricky L Jones which was uploaded on October 23rd, 2016.

The sandhill crane (Grus canadensis) is a species of large crane of North America and extreme northeastern Siberia. The common name of this bird refers to habitat like that at the Platte River, on the edge of Nebraska's Sandhills on the American Plains. This is the most important stopover area for the nominotypical subspecies, the lesser sandhill crane (Grus canadensis canadensis), with up to 450,000 of these birds migrating through annually.
Adults are gray overall; during breeding, their plumage is usually much worn and stained, particularly in the migratory populations, and looks nearly ochre. The average weight of the larger males is 4.57 kg (10.1 lb), while the average weight of females is 4.02 kg (8.9 lb), with a range of 2.7 to 6.7 kg (6.0 to 14.8 lb) across the subspecies.
These cranes frequently give a loud, trumpeting call that suggests a rolled "r" in the throat, and they can be heard from a long distance. Mated pairs of cranes engage in "unison calling". The cranes stand close together, calling in a synchronized and complex duet. The female makes two calls for every one from the male.
Sandhill cranes' large wingspans, typically 1.65 to 2.29 m (5 ft 5 in to 7 ft 6 in), make them very skilled soaring birds, similar in style to hawks and eagles. Using thermals to obtain lift, they can stay aloft for many hours, requiring only occasional flapping of their wings and consequently expending little energy. Migratory flocks contain hundreds of birds, and can create clear outlines of the normally invisible rising columns of air (thermals) they ride.
-wiki

Thank you very much Cindy!

Fabulous close up of a Sandhill Crane with great details, colors, pose, and composition, Ricky! Wisconsin is truly a great state to see Sandhill Cranes and Whooping Cranes. I was fortunate to see both on two visits to Neceedah NWR. F/L

Thank you very much Morris! There are, or at least were thousands of Sandhills, but most are now moving South for the Winter. Thanks again Morris!