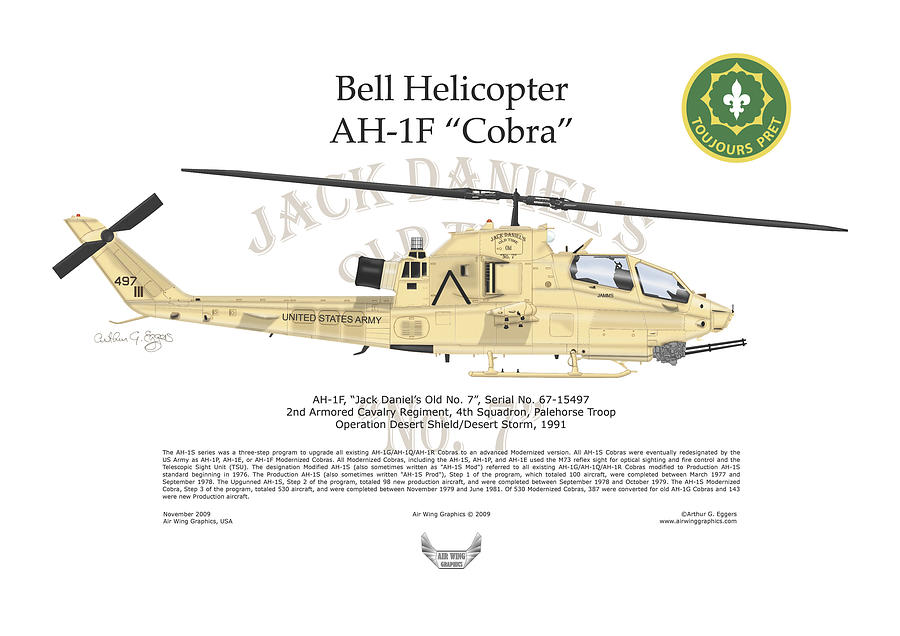 Bell Helicopter AH-1F Cobra is a piece of digital artwork by Arthur Eggers which was uploaded on December 12th, 2010.

The AH-1S series was a three-step program to upgrade all existing AH-1G/AH-1Q/AH-1R Cobras to an advanced Modernized version. All AH-1S Cobras were... more

The AH-1S series was a three-step program to upgrade all existing AH-1G/AH-1Q/AH-1R Cobras to an advanced Modernized version. All AH-1S Cobras were eventually redesignated by the US Army as AH-1P, AH-1E, or AH-1F Modernized Cobras. All Modernized Cobras, including the AH-1S, AH-1P, and AH-1E used the M73 reflex sight for optical sighting and fire control and the Telescopic Sight Unit (TSU). The designation Modified AH-1S (also sometimes written as "AH-1S Mod") referred to all existing AH-1G/AH-1Q/AH-1R Cobras modified to Production AH-1S standard beginning in 1976. The Production AH-1S (also sometimes written "AH-1S Prod"), Step 1 of the program, which totaled 100 aircraft, were completed between March 1977 and September 1978. The Upgunned AH-1S, Step 2 of the program, totaled 98 new production aircraft, and were completed between September 1978 and October 1979. The AH-1S Modernized Cobra, Step 3 of the program, totaled 530 aircraft, and were completed between November 1979 and June 1981. Of 530 Modernized Cobras, 387 were converted for old AH-1G Cobras and 143 were new Production aircraft. Limited Edition, Signed and Numbered by the Artist.

Thank you buyer from Vineland, NJ!!!