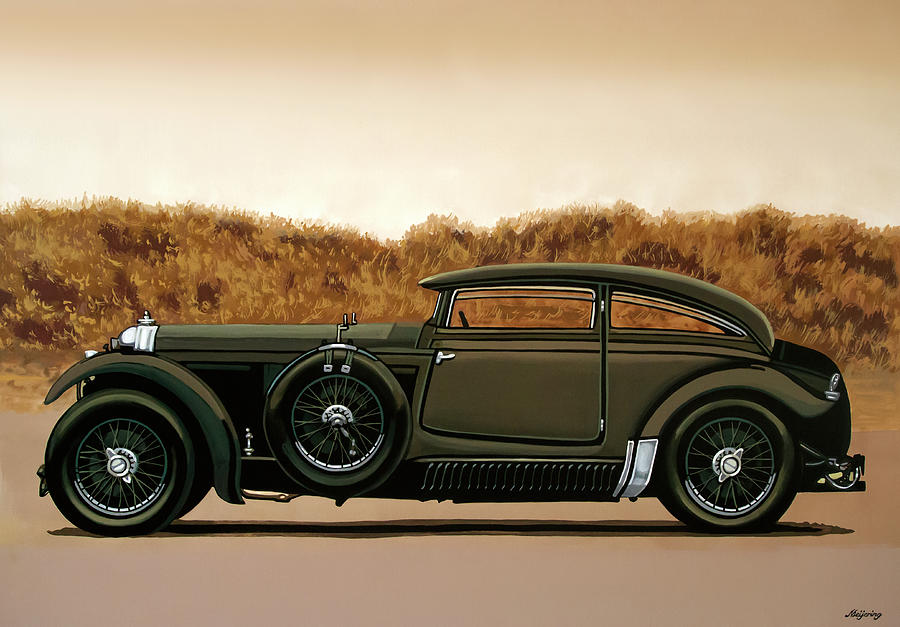 Bentley Blue Train 1930 Painting is a painting by Paul Meijering which was uploaded on January 15th, 2018.

Realistic acrylic painting of the Bentley Blue Train, painted by the Dutch fine artist Paul Meijering - the original painting is 120 x 90 cm and for... more

Realistic acrylic painting of the Bentley Blue Train, painted by the Dutch fine artist Paul Meijering - the original painting is 120 x 90 cm and for sale

Barnato drove an H. J. Mulliner-bodied Bentley Speed Six formal saloon during the race,which became known as the Blue Train Bentley. Two months later, on 21 May 1930, he took delivery of a new Bentley Speed Six streamlined fastback "Sportsman Coupe" by Gurney Nutting. Barnato named it the "Blue Train Special" in memory of his race, and it too became commonly referred to as the Blue Train Bentley. The H. J. Mulliner-bodywork was stripped off the original car's chassis to make place for a bespoke replacement, as was common practice for automobiles at that time.
As time passed, the Gurney Nutting-bodied car was regularly mistaken for or erroneously referred to as being the car that had raced the Blue Train. This was reiterated in articles and in Terence Cuneo's painting of the race, which shows the Gurney Nutting coupé just ahead of the train. In 2005 Bentley featured the coupé in the company's promotional material celebrating the race's 75th anniversary.
Careful reading of Barnato's account of the race, published in the 1946 British Racing Drivers' Club review, show that Barnato referred to "my Speed Six saloon," keeping petrol cans in the boot, and having only one spare tyre, while the Sportsman Coupė had no boot and two spare tyres, one on either side of the bonnet. Research efforts by Bruce and Jolene McCaw of Medina, Washington, who bought the Gurney Nutting-built "Blue Train Special", have further exposed and widely publicised the mistake. The original H. J. Mulliner Blue Train Bentley bodywork was also reconstructed, and both cars have been fully restored. They are both currently owned by the McCaws.

Congratulations, your work is Featured in "All Automotive Artworks" I invite you to place it in the group's "2020-2021 Featured Image Archive" Discussion!! L/Tweet

Stunning piece! I adore all of your work! Very fascinating to follow you! L/F

AAAh, thank you so very much, for your kind words and lovely compliments...;-))