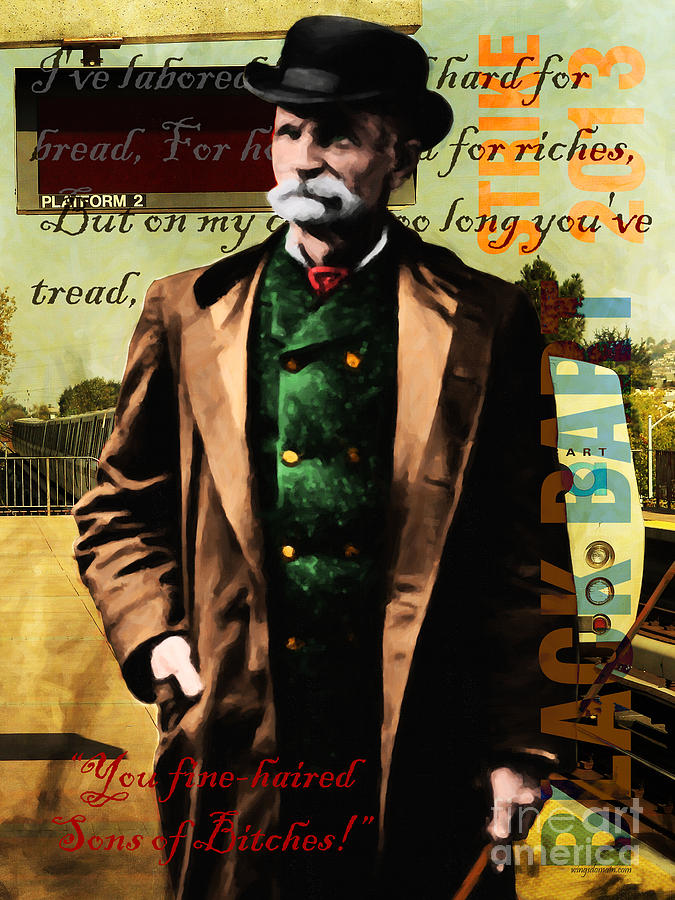 Black Bart Strike 2013 You Fine Haired Sons Of Bitches 20131018 is a photograph by Wingsdomain Art and Photography which was uploaded on October 18th, 2013.

The San Francisco Bay Area Rapid Transit BART union and their employees have declared a work strike effective Friday October 18, 2013. Most of the hundreds of thousands of commuters in the San Francisco Bay Area who rely on BART everyday have been putting up with this BART management/union/employee drama and frankly we are all fed up. Regardless of who's right or wrong, we the commuters have been used as pons in this endless vicious cycle. So what are we to do? Commemorate it! Commemorate it with this fitting tribute to Charles Earl Bowles aka "Black Bart" of yesteryear juxtaposed to this "Black BART - Strike 2013" of today happening in real time! Black Bart of yesteryear made a living robbing the transportation system of its time, the stagecoach, and putting fear in the eyes of every passenger. Now "Black BART - Strike 2013" is robbing the San Francisco Bay Area transportation system of our times, our BART trains, and once again putting fear in our livelihoods!

I've labored long and hard for bread,
For honor, and for riches,
But on my corns too long you've tread,
You fine-haired sons of bitches. -Black Bart 1877

Charles Earl Bowles (b.1829; d.after 1888), better known as Black Bart, was an English-born American Old West outlaw noted for his poetic messages left after two of his robberies. Also known as Charles Bolton, C.E. Bolton and Black Bart the Poet, he was a gentleman bandit, and one of the most notorious stagecoach robbers to operate in and around Northern California and southern Oregon during the 1870s and 1880s. -wikipedia

Painterly Style photo art have a lively colorful brush stroke texture in the tradition of master painters. Zoom in on an area of the image to see the artistry of this style. This type of artwork would look terrific on a large canvas, and a print on any other media would look just as stunning!