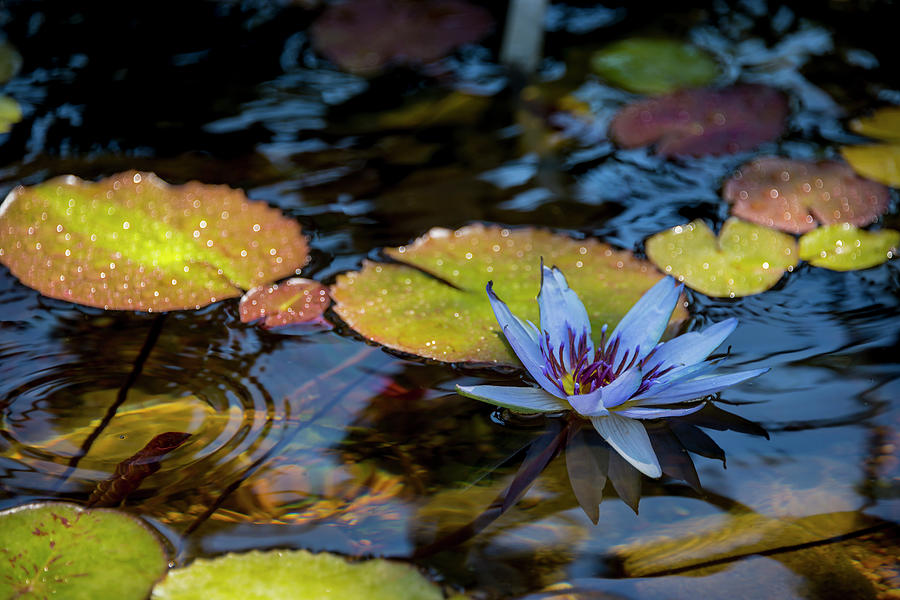 Blue Water Lily Pond is a photograph by Brian Harig which was uploaded on May 15th, 2014.

Nymphaeaceae is a family of flowering plants. Members of this family are commonly called water lilies and live as rhizomatous aquatic herbs in... more

Nymphaeaceae is a family of flowering plants. Members of this family are commonly called water lilies and live as rhizomatous aquatic herbs in temperate and tropical climates around the world. The family contains eight large-flowered genera with about 70 species. The genus Nymphaea contains about 35 species in the Northern Hemisphere. The genus Victoria contains two species of giant water lilies endemic to South America. Water lilies are rooted in soil in bodies of water, with leaves and flowers floating on the surface. The leaves are round, with a radial notch in Nymphaea and Nuphar, but fully circular in Victoria.

Water lilies are a well studied clade of plants because their large flowers with multiple unspecialized parts were initially considered to represent the floral pattern of the earliest flowering plants, and later genetic studies confirmed their evolutionary position as basal angiosperms. Analyses of floral morphology and molecular characteristics and comparisons with a sister taxon, the family Cabombaceae, indicate, however, that the flowers of extant water lilies with the most floral parts are more derived than the genera with fewer floral parts. Genera with more floral parts, Nuphar, Nymphaea, Victoria, have a beetle pollination syndrome, while genera with fewer parts are pollinated by flies or bees, or are self- or wind-pollinated. Thus, the large number of relatively unspecialized floral organs in the Nymphaeaceae is not an ancestral condition for the clade.

This is really lovely, Brian! you’ve captured the awesome beauty of these water lilies in a gorgeous composition;) 🍃

Congratulations on your feature on the Photography Hub :)

Congratulations Brian for your 4th place win in the "Flowers Flowers Flowers Contest." It was so wonderful to see your masterful and lovely images in the contest. Thank you for your entries. L/F/P/Fb Debra

Waterlilies make wonderful subjects. Congrats on the sale of this lovely image.

Beautiful Brain, congratulation on your sale.

Beautiful Brian !! Congrats on your sale.