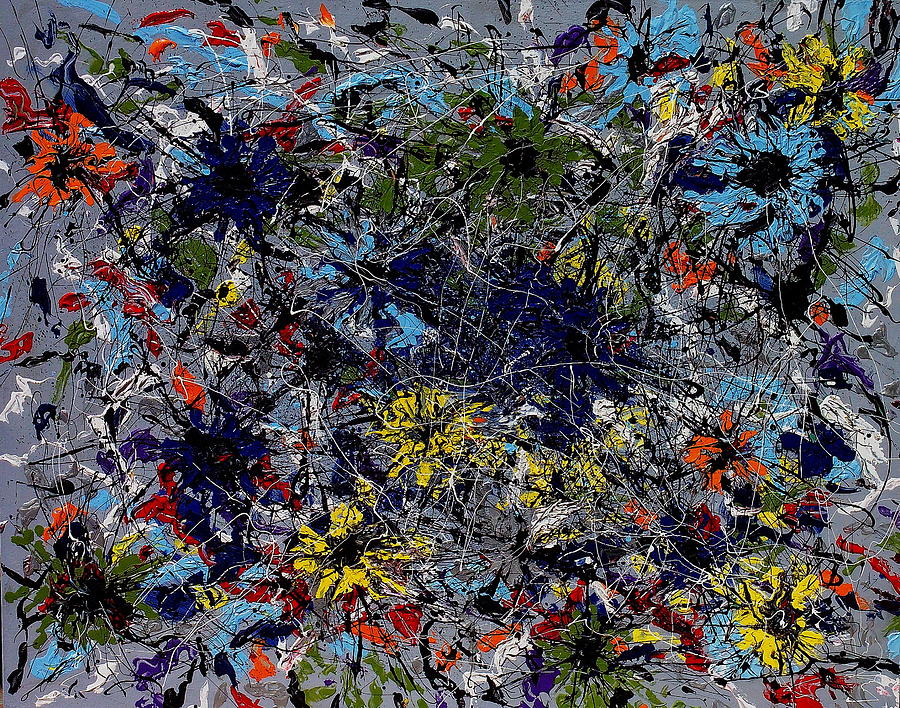 Boo Quay is a painting by Wayne Salvatore which was uploaded on July 31st, 2010.

Acrylic on canvas created in 2004.
Review by Screen Design: I like the florals coming through the frenzy of lines against the cool grey background. To me it suggest that the beauty in life will always shine through the tangled web of our lives. I'm a fan of cool tones and like the warm colors against the cool grey.
Review by Nicola Porrill: Judging by the title, it would not be remiss to think that this is a very unusual, original and fun take on a bunch of flowers. On the other hand, the bursts of colour are reminiscent of fireworks on a cloudy night. It could be interpreted in so many ways that it has almost become a floral painting...which isn't a floral painting.

There are so many colours on the canvas that it smacks of vitality and freshness, and the areas of green suggest life. The colours seem to have an extra brightness due to the fact that complementary colours have been used; blue is next to orange, red is near green, and there is even yellow and purple. Add to this the fact that they are placed upon a neutral background and it's all the more reason why they seem so bright, warm and inviting. The grey of the background acts to cool down the piece, preventing it from being too bright and busy, and focusing the eye on the colours.

Salvatore has arranged the piece well, as every inch of canvas is taken up. However, he has still managed to keep the balance as on the whole, there's the same level of detail everywhere. As such, it is as if the act of leaning in to smell a bunch of flowers has been captured in a moment. Once again, Salvatore has been a master of combining the senses.

This work has the feeling of bursting on to the canvas. I looked up the meaning of Boo Quay is it a place? I am thinking this has the influence of fireworks on a dock somewhere. Beautifully executed with depth, complexity and subtlety of colour. Nice work! Jo

a serious work! a convincing overall!