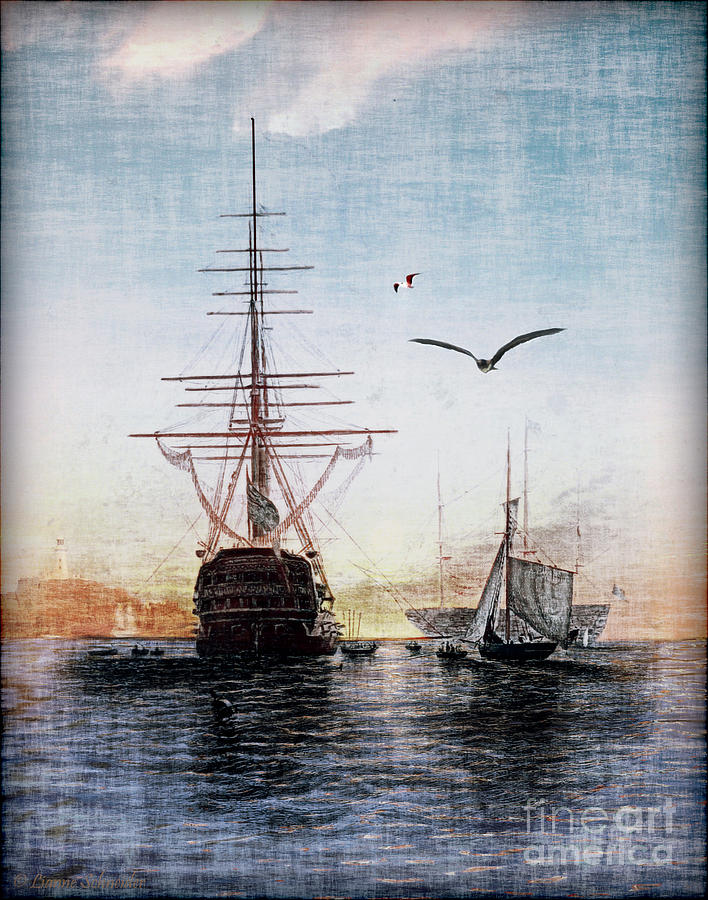 Brave New World is a piece of digital artwork by Lianne Schneider which was uploaded on June 26th, 2012.

The second in an extended series of digital paintings based on small black and white sketches in an old book that is currently in the public domain.... more

The second in an extended series of digital paintings based on small black and white sketches in an old book that is currently in the public domain. Ships and the sea - have always had tremendous symbolic meaning for me. I know I've lived before in the age of the tall ships, of daring exploration. For me there is no better analogy for my life's journey than all the joys and dangers one encounters on a sea voyage aboard a sailing ship bound for unknown worlds.

As with the Plantation/Estate series (which is certainly not complete yet) each piece in this series, which will be part of my 'Sea Stories' gallery, is done using a slightly different style or technique. I continue my journey with 'Brave New World' - ships leaving the harbor in Portsmouth bound for new colonies and warships designed to protect those.

It is not the safe harbors when we are tied up at the dock that shapes and determines our story, the log of our life's journey. Rather it is where we go between our ports of call, the risks we take, the discoveries we make when we are far out at sea, away from what is safe and known. How we brave the storms, endure the calms and doldrums, whether we trust in the stars to guide us tells us a great deal about who we are. . . Lianne Schneider . . .

'Flow with life's currents. . . Dare to ride on bold waves of change. . . out to uncharted waters . . .
For there will always be singers on the shore to welcome you back to the safe arms of Earth . . .'
Kristin Zambucka


A Life on the Ocean Wave

A LIFE on the ocean wave,
A home on the rolling deep,
Where the scattered waters rave,
And the winds their revels keep!
Like an eagle caged, I pine
On this dull, unchanging shore:
Oh! give me the flashing brine,
The spray and the tempest's roar!

Once more on the deck I stand
Of my own swift-gliding craft:
Set sail! farewell to the land!
The gale follows fair abaft.
We shoot through the sparkling foam
Like an ocean-bird set free; --
Like the ocean-bird, our home
We'll find far out on the sea.

The land is no longer in view,
The clouds have begun to frown;
But with a stout vessel and crew,
We'll say, Let the storm come down!
And the song of our hearts shall be,
While the winds and the waters rave,
A home on the rolling sea!
A life on the ocean wave!

Epes Sargent wrote poems about the Merchant Marine in particular. He was a minor literary figure among many greats with whom he associated, by virtue of his newspaper editing.
Brave New World MCN :: C5LJV-JJBH3-N5NLK

Image Copyright � Lianne Schneider http://lianne-schneider.artistwebsites.com All images and personal poetry are protected by copyright and may not be reproduced, downloaded, distributed, transmitted, copied, reproduced in derivative works, displayed, published or broadcast by any means or in any form without prior written consent from the artist. . Copyright on works derived from or based on images in the public domain applies only to the subsequent manipulation or painting resulting from my changes and the original image remains in the public domain. Such images are used with permission.

Music of the Heart

Ohh wow Lianne, you manage to generate such a wonderful inviting atmosphere. Lights and shadows here are just amazing and so the texture. I love the bird.. she just lift my heart up. The boats/ships are so fantastic. What a pleasure to see your work!! L/F

Wow Lianne! I am amazed at what you do with the old images, especially the b&w ones! This is fantastic! Beautiful colors and texture work! You bring them to life and still retain the vintage look and feel! f/love! :D

Stunning work Lianne! Reminds me of Turner´s wonderful sea paintings! The light and colours are so beautiful! L/F f

How wonderful of you to make a return visit Xueling! Thank you so much!!

Thank you - I'm so pleased that you like it Ronda. Very lovely of you.

Thank you ever so much Kume - so very kind of you.

Thank you so very much Juergen. This was one of my earliest "Down to the Sea in Ships" series and I'm particularly glad you liked it.

I love this. Another vote!

You're an angel Lenore - thank you so much.

I'm just so honored by your incredibly lovely comment Hanne - I can't tell you how much that means to me. Thank you.

Reminds me of a Turner painting - lovely work.

Thank you so much Jan - I'm thinking a few of your characters would be appropriately dressed for this voyage!!

Thanks so very much Deb - I really appreciate that a great deal. Have missed a ton of your beautiful work in my absence but I'll be playing catch up for a good long while.

This is Beautiful! F/V/FB Congratulations! Your piece has been chosen to be included in Amazing Art & Photography on Facebook. To view your image and LIKE US go to https://www.facebook.com/pages/Amazing-Art-Photography/132225846968883?ref=hl

How very exciting Sara - I am sooooooo honored. Thank you!

You created so many masterful images, Lianne! Boats are my favorite subject, your work is my inspiration! Thank you:)!

What a dramatic work of art! Congratulations, Lianne!

So very sorry to have taken so long to say thank you Michael - have been dealing with a serious illness in a family member so I'm no able to be here much.

Love this beautiful depiction of our collective history in the New world!! Fantastic and this whole set!! F/V

Thank you so much Barbara - forgive me for taking so long to say that. Serious illness in the family has kept me away.